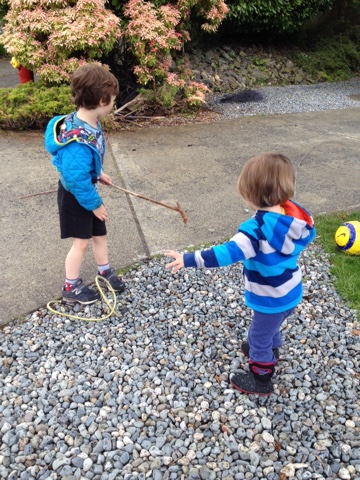 Yesterday, my grandson came rushing out from under the decorative bush at the end of the driveway - his fort. He had an armload of sticks which he tossed back under the bush.

"Grandma, I'm making a bomb fire!" he explained with great excitement. Then he picked some red and pink leaves from the bush and threw them onto his pile of bonfire sticks.

"Here's the flames of the bomb fire."

Next, he began dragging some bungee cords that he had hooked together, and pretended that it was a fire hose. He squirted imaginary water on the bonfire, talking about the bad guys who made the fire and how he had to rescue the people in the building.

My younger grandson, aged two, observed his older brother, aged four, and picked up a stick.

Then we negotiated finding "C" a different stick to play with, one that was not part of the fire drama taking place under the bush. Still watching his older brother, C began plucking red leaves from the bush and delivering them one by one to me to hold for him. 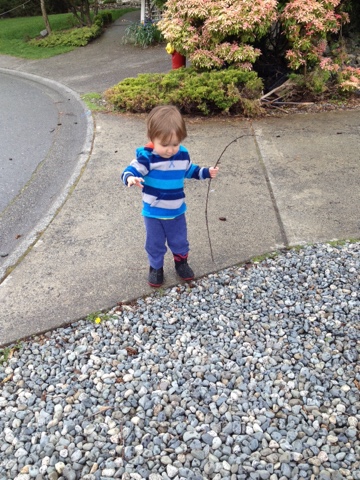 Honestly, I don't know why we even bother with making plastic toys, when sticks, rocks, leaves, and dirt (and bungee cords) provide so much scope for the imagination and hours of fun.

As you might have guessed, I am presently on grandma duty. I am staying with my two grandsons for a week while their parents are out of town. I live far away in a different province. Although I have visited quite often, this is the first time that I have looked after them for multiple days.

I had forgotten how exhausting a day with two preschoolers is! And how early the morning starts! Poopy diapers, two-year-old contrariness, wheedling for sugar, eating toothpaste, sibling disagreements, disappearing socks, and the many places where food can be smeared.

On the other hand, there is nothing quite as sweet as a cuddle and kiss from a toddler. Or the seriousness of a four-year-old explaining about a seffascope for looking at the sky, or asking concerned questions about Snow White's evil step mother. I was grateful that E was able to help me figure out how to remove the diapers from the complicated odour-free diaper disposal system when it became full. Both boys love to be helpful!

We have been to an outdoor preschool program, swimming lessons, soccer, a science centre, gym drop-in, and the playground. Every day we read many, many stories. E enjoys long books and has amazing knowledge about the natural world, and about how things work. C is very interested in animals, music, buses, and construction machines.

I am so lucky to have this opportunity to spend intensive time with my dear grandchildren. They are growing up so fast! I will recover from a week of being tired at the end of each day, and I know that the long grind of full-time childcare is in my past, not my future. But if I didn't have the chance to spend time like this with them now and from time to time, I would miss out on truly knowing them as young children.

I expect that being a grandma will be one of the best things about being retired.
Posted by Dr Sock at 10:44 PM