So, if it seems as if I have been a bit absent from my blog lately here’s why. I have been travelling in Germany.

My daughter is a net artist and also works in art design in the film industry. She was invited to present one of her short films at an international film festival in Hanover, Germany, the Up and Coming Film Festival. And lucky me -- I got to come along! We went on a mother-daughter trip, with the first part of the trip in Hanover at the film festival, and then we went Berlin for a few days. So exciting!

This film festival features young film makers from all over the world. With only 167 films selected from over 3,000 submissions, it was exciting that Erica's film was one of the two presented from Canada. 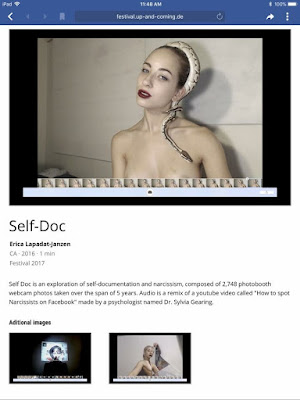 As it turned out, Erica's film was scheduled as a headliner film, screened as part of the Opening Ceremony. I had a proud mommy moment as I sat in the theater and watched her film, and then again as Erica was invited up onto the stage to speak about her work. She did a fantastic interview.

As a guest of one of the young film makers, I had a festival pass for the four days. It was really fun watching the films, which included a wide range of genres: narrative, action, documentary, animation, experimental, and so forth. The talent of the young film makers was astounding, and they did not shy away from taking on difficult topics and world issues.

As an example, one memorable documentary, Ici, personne ne meurt (Nobody Dies Here), showed the plight of gold miners in Benin, Africa. Another film that really made an impression on me was Terrorist, one of the films in the German section. It addressed how easily blame for a terrorist act can be misdirected, and the terrible consequences for family members who are left behind. Another film that I'll mention here, one of the winners in the international section, was Parallel. The title of this  U.S. film references the division of the Korean peninsula at the 38th parallel. The film maker, Jiwon Choi, interspersed interviews with her grandfather, who served in the Korean War, with clips showing the rise of Korean pop and commercialism. Of course, there were many additional amazing films, including some excellent short animations and some 360 degree films.

We had some adventures getting to Hanover. We barely made our connection in Frankfurt because there is a lot of construction going on at the airport. We had to disembark our flight way out on the tarmac and be bused to the terminal, clear customs, and run to our gate (through a very big airport). We were among the last to make it to the gate, then we were bused out to the plane which also was parked far from the terminal. Although we just made the connection, our luggage did not. (It eventually arrived the next afternoon.)

We stayed in a cool "Euro-style" hotel -- which was not surprising seeing as we were in Europe! Breakfast was included. I love European breakfasts. The spread included cold meat, cheeses, smoked salmon, yogurt, fruit, many nice breads, jam, as well as eggs and other hot foods, and cereal. My breakfast beverage of choice was Klein Milch Kaffee. Coffee and beer are better in Germany.

We ate at nice restaurants, including a Bavarian schnitzel restaurant and a couple of great Italian restaurants. I had been brushing up on my German in preparation for the trip. Unfortunately I am nowhere near fluent, but the bit of German I knew was helpful from time to time. However, most people we met spoke English much better than I speak German. Erica did lots of networking. I continued working on my novel, and managed to write another 58 pages during the ten-day trip.

I tried to write blog posts while I was there, but had technical issues. I was unable to upload photos to Blogger from my phone or tablet, which was frustrating. I had to wait until I was back home, where I could send the photos from my phone to my computer, and then upload them.

After Hanover, we went to Berlin, a city that I have long wanted to visit. More about that in another post.