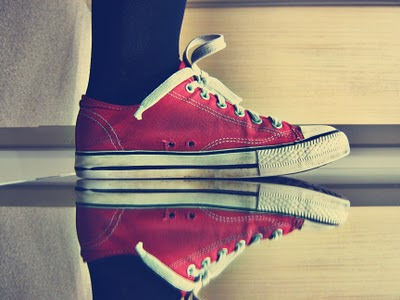 I found this image, Walking on a Dream, at a bilingual poetry website, Poesia torta|Crooked poetry. This blog by Kenia Crissantos from Brazil features poetry (in both English and Portugese) and some great photos. Check it out!

I have been thinking about representation, and especially reflections, doubles, and reversals, since watching the recently released 3D film Alice in Wonderland by Tim Burton. The film combines elements from both of Lewis Carroll's original Alice in Wonderland and Through The Looking Glass, but adds a narrative line not in the books.

As a child, I read and re-read those two books. In Looking Glass, I found the idea of reversals very interesting; images were reversed, time ran backwards, and social actions often were opposite to convention. Also in that book, Carroll took objects with inherent mathematical patterns, like playing cards and chess pieces, and animated them. It has been a very long time since I last read the book. I should go and dig it out of my bookshelf and read it again.

Burton has produced an interesting mashup that reinterprets and extends the two Carroll books. Many of the central events and characters from the books are present in Burton's film, and faithful to the spirit of the original: the White Rabbit, the Cheshire Cat, the caterpillar smoking a hookah, the Mad Hatter's tea party.

But there are significant differences as well. His Alice is a young woman returning to Wonderland thirteen years after her first visit (which is presented briefly in a flashback). As well, Burton's Mad Hatter and caterpillar are much more sympathetic characters than Carroll's, and Burton's White Queen is a different creature altogether than Carroll's. But perhaps the most significant departure is the addition of a narrative line that brings the bizarre tale into conformity with typical North American narrative structure. In Burton's version, Alice becomes the (reluctant) hero who slays the dragon... er... Jaberwocky in a climactic battle, thus rescuing the enslaved populace from the evil Red Queen, and everyone lives happily ever after. It's familiar, and it works.

Burton's Red Queen, played by Helena Bonham-Carter, is fabulous. Many other parts as well are exactly perfect. I loved the movie, especially the 3D version. But maybe it ended just a little too neatly. And there is much more room to have explored the idea of reversals.
Posted by Dr Sock at 10:54 PM No comments:

I was reading one of my favourite blogs, The Longstockings, and came across this piece of writing advice from Lisa Greenwald: "think, think, think about your book!" Her point is that the work of writing doesn't occur just during the time that a writer is sitting at the keyboard or in front of a blank page. Rather, much of the work of writing takes place in the writer's mind during the in-between times -- commuting, walking, showering, gardening.

Perhaps this bit of wisdom about writing tends to be placed in the background in many books on writing just because of the truism that until the words are on the page, the story hasn't been written. Many a wonderful idea for a story never makes it to the page. For many writers, the anxiety about putting words down prevents them from even starting. So there is a lot of advice focused on coaching writers to sit down and write -- to just get the words down, and defer any editing and much thinking until a second revision stage.

But, in fact, the daydreaming and thinking time periods are also essential. The story doesn't spring to life only at the keyboard. The story is churning away, under the surface, whenever we let our minds have the freedom to do so. For me, it is so important to have times in my day that are not filled with other fully engaging cognitive tasks. When I use up my thinking on work tasks, or reading, or social interaction, or any activity that is filled with words, my mind does not have the unstructured space it needs to drift to the story at hand. If I let it have the time, my unfettered mind does a lot of the writing for me, in between each session at the keyboard.
Posted by Dr Sock at 10:47 AM 4 comments:

Email ThisBlogThis!Share to TwitterShare to FacebookShare to Pinterest
Labels: writing

Hands in the Soil

The digging and planting has begun!

Every year, as the last of the dirty grey snow recedes, the pussy willows puff out, and the springtime smell of wet earth swirls on a promising breeze, my thoughts turn to the garden. Now keep in mind that I do not live in the balmy south but in a zone 4 region in Canada where the folk wisdom tells me that the 24th of May weekend ("May Long," in the younger generation's parlance) is when to put in the garden. Anytime before that, the over-eager gardener risks a hard frost.

So what do I mean, the planting has begun? Well, this has been an unusual winter -- little snow, warm temperatures, and a very early spring. Everything is a 5-6 weeks ahead of schedule. I bought a gardening magazine the first week of February, and have pored through it, becoming ever more intoxicated with grandiose gardening plans. A couple of weeks ago, I gave in to the urge to get my hands in the dirt, and planted two kinds of tomatoes and jalapeno peppers in biodegradable fiber (not peat) pots, and set the flat on a south facing window sill in my living room. I also planted five pots of herbs -- basil, chives, marjoram, oregano, and parsley. Everything but the parsley has germinated, and now I am thinking of starting some cucumbers and eggplants.

Okay, if you've done the math, you're thinking I've made a big mistake. Normally one starts seeds indoors 5-6 weeks before the planting out date, and I just told you that the date for this region is May 24. Oops. Do I really think that I can plant tomatoes out in early to mid April, even this unusually warm spring?

Aha! I have a greenhouse. Admittedly, it is kind of rickety, has no heating system, and the south-facing plastic needs replacing soon. But it is a productive little greenhouse. Last year from June to mid October, I scarcely bought vegetables. The greenhouse veggies, along with potatoes, onions, bush beans, and herbs that I grew in a small outdoor plot, fed the family. And I grew it all organically. So the greenhouse is where I'll put the tomatoes, etc., when they are ready to set out, and probably I'll take the added precaution of using hot caps at first. (I've been saving milk jugs.)

Today the gardening fever extended beyond my indoor flats. I turned over the compost (it is not frozen! It should still be frozen in March), and screened a wheelbarrowful. Then I dug up and prepared one bed in the greenhouse, augmenting the nice sandy loam with compost and sheep manure. I planted romaine lettuce seeds, and some mixed winter salad greens (stuff like kale and mustard greens). Let's just think of it as an experiment.

For this truly is a record -- the first seeds in the ground on March 6th.
Posted by Dr Sock at 9:42 PM 2 comments:

Check out this link to The Skeena Angler. It's a writerly perspective on life and fishing written by my friend Rob -- writer, angler, musician, red wine imbiber, and all-round good guy. I've also linked it on my sidebar.
Posted by Dr Sock at 11:55 PM No comments:

I am one of those unusual people who does not watch TV. I grew up in a small town that was, to me, the center of the world, but which other people would describe as "remote," "on the frontier," or "in the bush." Television reception did not come to my town until the winter that I was six. My dad brought one home from the store on spec so he could watch a ski jumping competition on it. I had never seen a television before. I remember that I actually went around to the back of the TV to try to discover how the little tiny ski jumpers had managed to get inside of it. My theory was that they entered single-file through a pipe. However, I didn't have any explanation as to how they could have put the mountain and the snow inside the TV. And why didn't the snow melt now that it was inside the house?

By the following summer, we owned a black and white TV with rabbit ears, which was proudly ensconced in a corner of the living room. It was popular with TV-less neighbourhood children, who dropped in to watch Quick Draw McGraw, Batman, and Bugs Bunny. Over my growing up years, the television remained a centerpiece of the living room. At some point, we had an aerial installed on the roof (remember TV aerials?), and at some later point, we acquired a colour television. However, there was only one channel; it broadcast CBC plus some local programming. Cable did not come to the area until many years after I had grown up and moved away.

Those were the years of my TV watching -- ages seven to age eighteen. That is the only era for which I have even a remote possibility of being able to answer entertainment themed Trivial Pursuit questions. After that, I did not own a TV for quite few years. Then when I was married with children, TV came into my life again, but I seldom watched it. (There was a two-year period around the early nineties that I suddenly started watching two programs: L.A. Law, and Star Trek, The Next Generation. That's it. I guess I was looking for any excuse to avoid writing my graduate thesis.)

At this time of my life, we have a TV with a full cable package that resides in the basement for the benefit of my son. I don't watch it, except for three things. I watch elections. I watch World Cup Soccer. And I watch the Olympics. The Olympics are over now, and so my sudden spate of TV-watching is now finished as well, for awhile. I think my son will be relieved to have the basement TV room back to himself again. Just this last few weeks, I've been able to contribute to the conversation when people started talking about what they watched on TV last night; that's been a benefit. But I will be glad to get back to my old non-watching habits. . . . all that time -- time to do what I want to do.
Posted by Dr Sock at 12:00 AM No comments: