Today, I am delighted to bring you an interview with the author, Gail Madjzoub. Gail is currently based on Vancouver Island in British Columbia, Canada, but she has spent her life living all over the world.

Gail is a member of my writers' group. I had the opportunity to serve as a preliminary reader for her recently published novel, and was very pleased when Gail agreed to do an interview with me for Dr Sock Writes Here.

Your novel, Crimson Ink, spans a period of more than five decades in modern Iran. Tell us, briefly, what the novel is about. 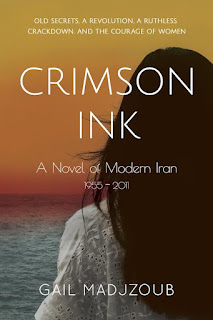 After the Islamic Revolution, Fereshteh, a woman doctor and a Baha'i, experiences along with her family and religious brethren far greater than usual persecution for their beliefs; they struggle to survive. Compassion for the countless others who also run afoul of the regime prompt her and her physician husband to treat those emerging from the torment of prison in the ‘80s and again following the chaotic aftermath of the 2009 election.

Meanwhile, Fereshteh joins forces with others to help women enduring not only the regime’s oppression but also domestic abuse. Her work and her religion become the pretext for her imprisonment and worse. This has unintended consequences for other family members, yet there is resilience and there is hope.

The story is told from several points of view. As a writer, what strategies did you use to provide narrative structure and coherence, given the various points of view and long timeline?

To help readers make sense of the large cast of characters from three different Iranian families (all with names unfamiliar to a Western reader), I created family trees, bolding the names of those who are important, especially whose point of view drive the story. At the end I added Glossaries and References.

To manage the long timeline I grouped chapters into “Books” that reflected eras: Pre-Revolution (1955-1978), Revolution (1979-1980), Post-Revolution (1989-1993), “2008”, and Reform (2009-2011). Within these I selected only significant years, months and seasons, showing each family separately but simultaneously up until 2008. Only during the final three years of the narrative do all three become inextricably intertwined; their interaction then drives the plot to its climax and resolution.

One of the themes in the novel that I found very interesting is the complexity of family. Could you talk about that?

The main characters come from a large extended family split down their religious lines: a Muslim brother and a Baha'i sister. While the sister’s family embraces everyone, it’s only because of the brother’s love and loyalty to his sister, despite what he considers her religious ‘defection’, that he and his family tolerate hers. Sinister undercurrents, and secrets and betrayals born of fear carry grim consequences for many, some of which emerge only over decades.

In the second family, the one fair-minded son finds he can’t escape his family’s legacy. This and the Revolution tether him to a path that causes him to forget who he is.

The third family produces a son out of squalor, desperation and neglect. His eventual reconnection with his powerful cleric father gives him free reign for his yet undiscovered aberrant proclivities. His dealings with and marriage into the first family, and his professional relationship with the son from the second family complicate all relationships in unforeseen ways.

Although your story is fictional, it speaks about real political and social events. What challenges did you face in meshing fact and fiction?

Historical events created a solid framework for the story and details of these helped fill it in. It was actually easy for me to fit my fictional characters and their personal stories into this. They’re a mix: composites of real people whose stories I knew or read about, and purely fictional ones based on probable personality types likely to be found within such a narrative.

The real challenge was balancing my portrayals of characters and events. I didn’t want to get into the quagmire of politics and known personalities, nor did I want to reduce characters, politics, social justice and religion to simple black and white depiction. All are complex and I saw my task as providing nuance and opposing perspectives without becoming dogmatic. This took a great deal of time. Discussions with early readers helped me in this.

There are many routes to publishing. What approach did you take, and why?

I researched all possibilities and had conversations with other writers. Then sat on the fence for a long time. Finally, after forays into the world of query letters, agents and publishers, consideration of the issues with publishing contracts, intellectual property rights, the long timelines, and possible frustrations of being at the mercy of other peoples’ demands and delays, I felt that self-publishing was the only route for this book. It had taken me many years to research, write and edit, and I wanted it to be published on my own terms and timeline.

Are you working on a writing project now? Can you say a few words about it?

Yes. It’s a sequel to Crimson Ink. I’d thought I was done with the story, but in early 2020 I realised this wasn’t so. In light of current events my characters were agitating and telling me they had more to say. Iran has become increasingly harsh in its treatment of many of its citizens, particularly women and minorities. Social justice questions continue to loom large. In my sequel, at least, I can bring some resolution to a couple of the issues I addressed in Crimson Ink.

What advice do you have for writers, either about writing or publishing?

You can write at any age. I’m a late bloomer, having started when I was 50. You simply must have passion and the courage to set words onto a page. And now, many years later I also know that you can learn about and navigate the publishing game. There’s a wealth of information and tools out there. You can learn new technology: how to use writer-specialised software, software for formatting a manuscript, the ins and outs of self-publishing, and social media as a marketing tool. If you want your book published, you will learn how to do it. 😊 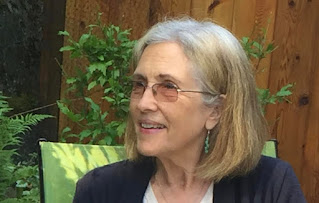 Bio: Originally from the American East Coast, I lived & worked for more than 30 years in Europe and Africa & have traveled extensively.  After settling again in North America I began writing.  My professional background includes education, health care, life coaching & facilitation.

The book is available on all Amazon sites.