A Visit to Sintra

We have been doing a fifteen day tour of Portugal. After five days in Lisbon, we went to to Sintra for two days. The Vila de Sintra is a city in the municipality of Sintra, located in the Sintra Mountains on the west coast. The area is a UNESCO World Heritage Site because of its historical importance. This area just north of Lisbon is also known as the Portuguese Riviera. 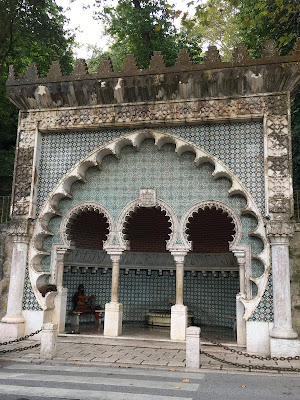 We stayed in a small b&b in the town of Sintra, and spent the first day exploring the area on foot. We hiked through the town past the municipal administration building, some large gardens, the National Palace Of Sintra (which served as the summer palace for royalty for a couple of centuries until the end of the 1600’s), and the Quinta da Regaleira (which unfortunately had just closed to visitors by the time we made our way there). The photo above shows a small alcove along the main roadway. 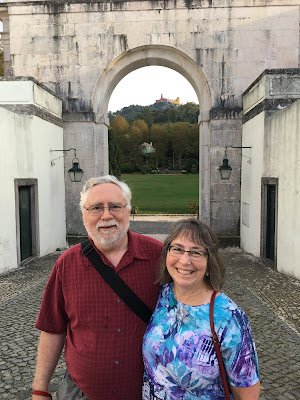 Near the Quinta da Regaleira, we took in the view over the Vila de Sintra. Looking in the other direction, through the arch behind us you can see the Palace of Pena on a nearby mountaintop. 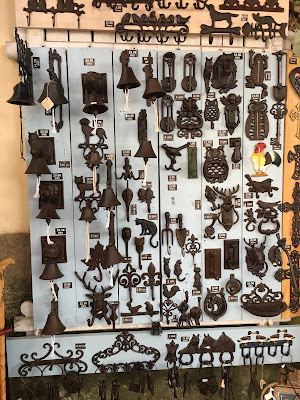 Throughout Sintra, there were many stores catering to tourists. For example, these iron items looked interesting, although a little heavy to transport home via airplane in a suitcase.

On the second day, we bought tickets for the “hop-on-hop-off” bus, and boarded it to take us to the Castle of the Moors on one mountaintop above the city, and the Palace of Pena on another nearby peak. It is also possible to hike up to the castle via a walking trail and then over to the palace, although it would be a long, steep route. The road was very narrow with many switchbacks to get to the top. We were amazed to see how the well the bus driver negotiated the narrow twisty road, and were glad we had left the rental car parked down below. 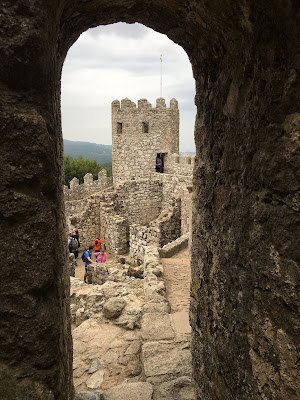 The Castelo dos Mouros was a military fort built in the tenth century during the time that the Moors occupied the Iberian peninsula. In this photo, you can see the keep. 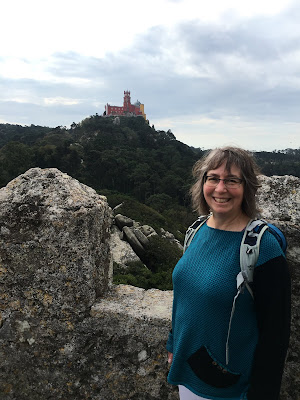 From the castle, you get a good view of the Palace of Pena. 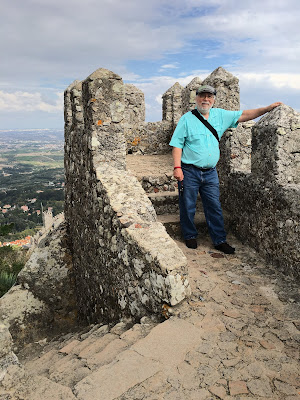 The views in all directions from the castle are amazing. 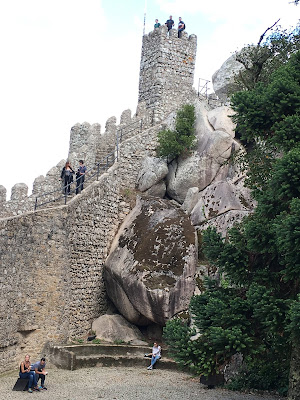 We climbed up and down many stairs as we hiked around the castle. 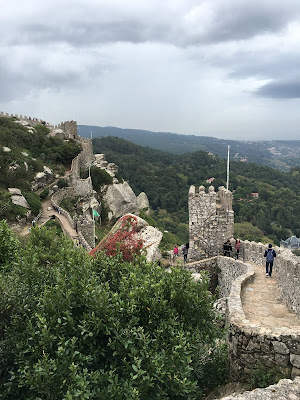 This photo shows the castle wall going from the keep to a second high point. I walked all along the castle wall, even though the ground fell away below in a rather breathtaking way. Rob took an alternative route to the far side. After exploring the castle, we hiked back out the road and hopped on the bus again, which dropped us off at the wall around Pena Palace.

Pena Palace is built upon the foundation of a former monastery on the site, and it incorporates many elements of the former building. It was built under the initiative of King-Consort Ferdinand and Queen Maria II in the mid-1800’s. It is considered to be the preeminent example of Portuguese Romantic architecture. 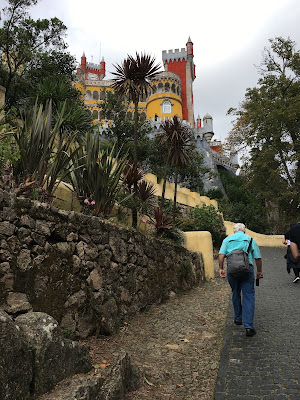 From the wall around the palace to the palace itself there was another long hike up a hill through the Pena Gardens. If we had been so inclined, we could have paid 3€ each and ridden up in a shuttle bus. But we walked, needing to balance some of the eating we had been doing with some vigorous exercise. We certainly achieved more than our 10,000 steps on this day. 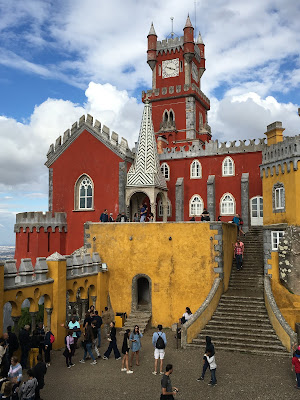 Pena Palace is like a fairytale palace, and it is equally beautiful on the inside. 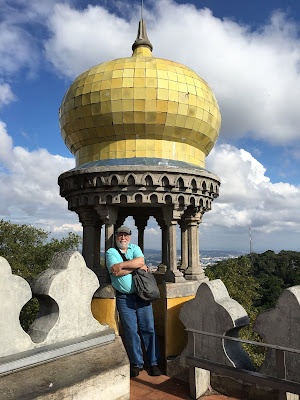 From the palace, there are fabulous views over Sintra and the mountains nearby. 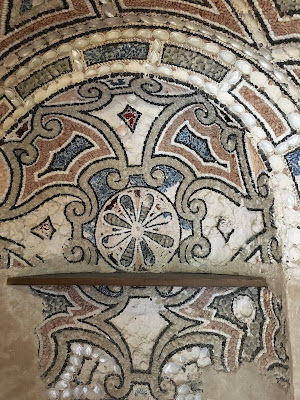 The photo above is of a small niche in the interior. The wall mosaic dates from Moorish times. If you look closely, you can see that seashells were used in the mosaic pattern. Later, this space was used as a storeroom for the palace. 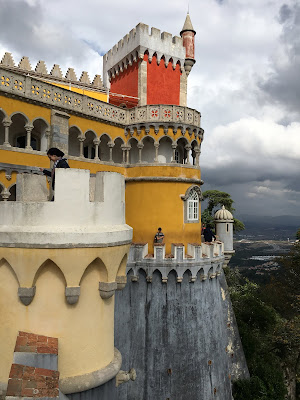 Some brave souls were doing the exterior wall walk. Not I. 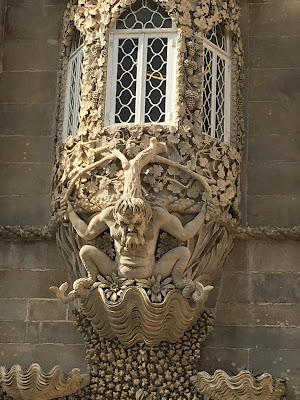 There were elaborate carved details throughout the palace. Above you can see a representation of Triton, god of the sea. He was located on the exterior, just above the main entrance.

We were astounded and delighted with the beauty and history in Sintra. We are glad that we made it to this area during our time in Portugal. 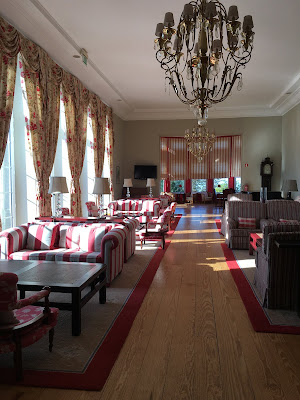 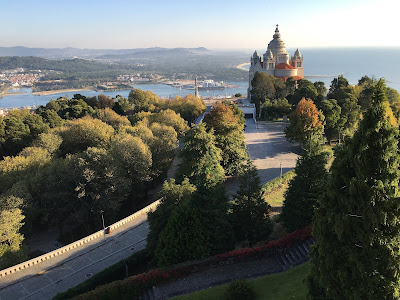 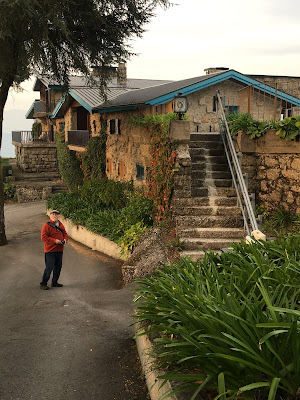 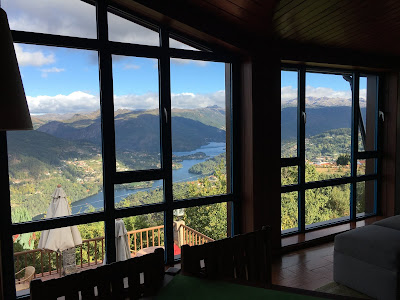 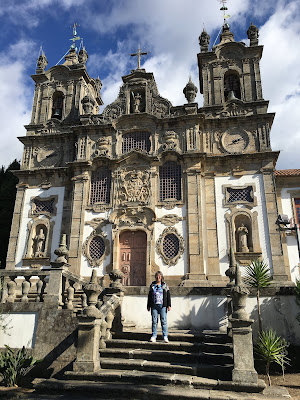 Last weekend was Thanksgiving weekend in Canada. Thanksgiving, for me, has always centered around family coming together from wherever we are and enjoying good food. Now that I have retired and moved back to BC, it is much easier to enjoy holiday celebrations together. I live near my oldest daughter and her family, and my two other (grownup) children are just a ferry ride away. Rob’s two kids and that set of grandchildren live farther away, and we are planning to travel to spend Christmas with them.
But, this Thanksgiving was a little different from past years. The studio art tour group that I belong to hosts three events a year — a Spring Showcase, a Thanksgiving Studio Tour, and a Christmas Crawl (which is also a studio tour). I participated in the Spring Showcase, and wrote about it here. The Thanksgiving Tour includes all three days of the long weekend.
For the tour events, artists open their studio/galleries to the public. People drive from studio to studio to view and purchase art, including paintings, pottery, handmade glass, wood carvings, jewellery, fabric art, and soap. Twenty studios were open for our Thanksgiving Tour.
This is the first time I have been part of a tour. It required lots of preparation. 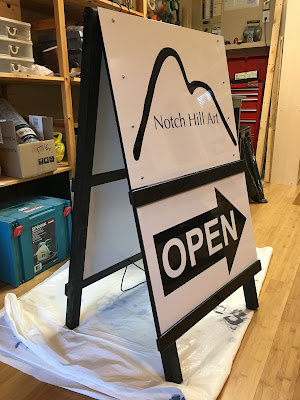 This photo above shows my new sandwich board sign. There are also photos below showing the sign I now have in front of my studio. My daughter, the net artist designed the logo, and Rob built the cedar signpost and sandwich board. 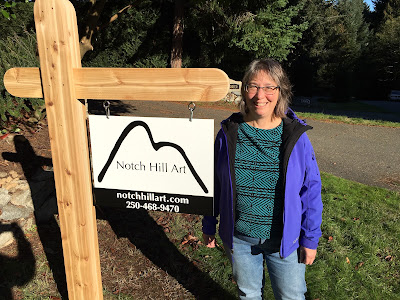 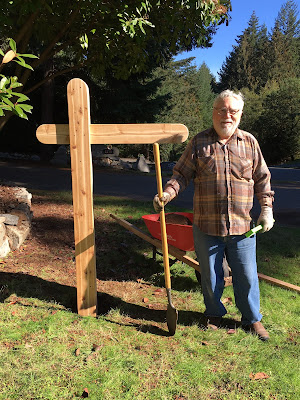 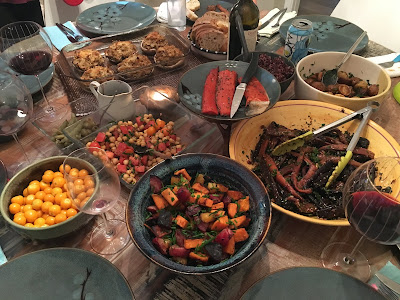 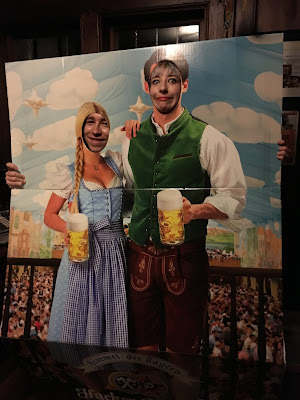 I had lots of visitors to my studio over the three days, and even started a new painting.
Read more about Nanoose Bay Thanksgiving Studio Tour here.

My younger daughter, her friend, and my son came over on the ferry for the long weekend. Because of the tour, I did not have time to cook a big Thanksgiving Dinner. Instead, my daughter had the whole family over on Thanksgiving. She cooked an amazing feast! We also went out one night to a local English style pub and had a great dinner there, followed by some goofing around. 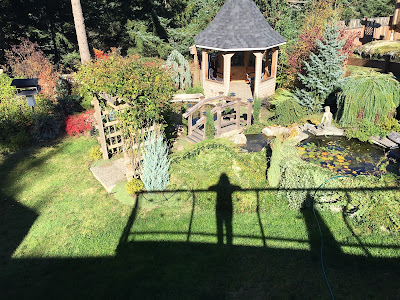 The weather has turned to Fall, and the leaves are brilliant colours.

I am grateful for my family, good times together, the chance to make art, and the beautiful place that I live.