Okay, I know you're expecting my usual Christmas rant. But instead, I'm going to write about the joys of our Christmas celebration, and share a few photos.

We had a really fun Christmas this year. We were very happy that two of my brothers and my son travelled to our Island home to spend Christmas with us. We also had the chance to spend lots of time with my two grandsons, their mom (my daughter) and our son-in-law. We got together with friends, and participated in several holiday community activities (one of which involved cooking a community dinner for 60 people!).

I did a lot of cooking (and eating) this Christmas. Somehow, I forgot to take pictures of the food -- how did that happen? We balanced all the time around the dinner table by going hiking several times, skiing twice, and skating once. There were also some very competitive games of cribbage, jenga, otrio, and battleships. We saw the new Star Wars movie together, as well as a new Christmas movie, and some of us watched quite a few hockey games.

The first ski day, we had beautiful sunshine, but hardly any snow. We scratched our the bases of our skis badly on rocks that were poking through. But Rob and my brother Tony are talented ski techies and they fixed up our skis the next day.

One afternoon, we went to a community skating party -- my daughter, son-in-law, son, two grandsons, and me.

On Christmas Eve, we managed to fit in a pub dinner.
And then on the big day, there was much merriment. We cut back quite a bit on the consumeristic aspects of Christmas this year. But there was still joyful giving of gifts, along with sipping of wine, board games, walks, visiting, and cooking and eating a traditional Christmas dinner. (Where's my photo of the turkey? I thought I took one...)

Of course, one of the best parts is watching the kids get excited about giving and opening their gifts.

The adults had fun too.


Rob installed a new cartridge on his turntable so Tony could listen to his new album. A few nights later, we had friends over and spent half the evening in the basement man cave listening to LPs from 50 years ago (re-mastered ones).

And, yes, we had to sample quite a few of those yummy wines, craft beers, and a few of us got into the scotch (not me).

"We interrupt this important moment of putting the hot food on the table to take a Christmas dinner photo..." My seven year old grandson took this dinner photo! The younger one, age four, also took a few hundred photos with his new camera, which were then deleted so he could take more photos. 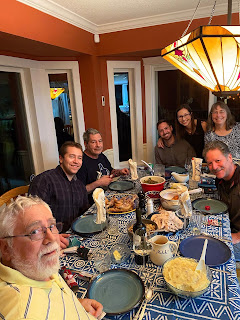 Of course, one of the sad things about Christmas is missing the family members who are celebrating elsewhere. We phoned my other daughter and her significant other who are spending Christmas in Europe. She's sent lots of cool photos of her trip.

We also talked with Rob's daughter's family, and shared photos. We're excited to see that set of grandkids soon, because we're going on a trip together in January.

We had dinner at my daughter's house on Boxing Day. It was a chance to learn a really cool new board game called Otrio, which is a bit like tic-tac-toe but more complex and strategic.
The best thing about Christmas this year was spending time with each other. When the holiday is less about "stuff" and impossible decorating standards, there seems to be more time to just hang out and do thing things together. I feel so grateful to have these wonderful people in my life. Relationships are the true meaning of Christmas, I believe.

But even a wonderful Christmas like this wasn't all rosy. There are always little negative things, like moments when the kids get over-tired and full of sugar, or me having insomnia Christmas Eve and being really tired all day on Christmas, or the fact that the kids' new skis and bindings weren't set up properly and we didn't discover it until we got to the ski hill. The usual worries (like about a loved one's health or financial woes) don't go away just because it's Christmas. And Christmas is also a time when we especially miss people we have lost, like my dear Mom who passed away more than a year ago.

The joys of Christmas seem all the more poignant set against the bittersweet aspects. As we transition to the new year, I want to remember the lessons of Christmas -- being together is what matters; we're doing our best and that's good enough; let everyone contribute in their own way.

A Month of Writing


November is National Novel Writing Month. This year, even though I haven't yet completed the revisions on my novel, The Age of Grandchildren, I decided to commit to signing up for NaNoWriMo this November.

Hitting the goal of 50,000 words meant writing, on average, 1,667 words every single day of November.

A Few Words About My Writing Process


One thing to keep in mind is that writing is time-consuming. And I am a very slow writer. Although some writers like to pour the words out onto the page to generate a first draft without worrying much about vocabulary, sentence structure, sequence, and so on and then go back and revise later, I like to compose carefully and revise and edit as I go along. Therefore, in order to get 1,667 words down on the page, I needed to spend five or six hours at my computer each day in November.

I didn't achieve the goal of writing 50,000 words in one month. But I did write 43,700 words, and I am very pleased with that. Since the end of November, I have continued to write (despite the distractions of Christmas in all its glory), and my novel is now 46,583 words long. That is eleven and a half chapters, and 172 manuscript pages.

Before sitting down to write on November 1st, I had written some notes, including a plot overview, some character sketches, and some notes on subplots. I had also written a couple of pages setting the opening scene. But that was all. Those 172 pages came out of my head during November.

Five to six hours hunching over the keyboard every day has left me with a sore back and tennis elbow (from the mouse). I didn't keep up my usual level of exercise. It reminds me of my pre-retirement life!

The working title of this novel is The Time Before Time Zero. It is a prequel to The Age of Grandchildren, and there will eventually be a third novel in the sequence. It is set in the greater Vancouver area in the near future. It tells the story of how twenty women ended up hiding underground in a shelter beneath a university. It is told from the perspective of four different characters. Time Zero is the moment in time when everything changes for the characters.

Excerpt From the Novel

The Woman on the Platform
“Breeder! Breeder!”
Beulah was hurrying along the sidewalk, her eyes on her feet and her mind turning over a problem they’d discussed at the meeting, but now she looked up and saw a knot of protestors clustered around the transit entrance. There were twenty-five or thirty of them, several waving placards.
“Shame, shame, you’re to blame!” They started up a chant, waving signs to punctuate their message.
“End-of-Timers,” Beulah muttered to herself and began elbowing her way through the crowd toward the gate. A fat man with a shaved head blocked her way forward with his hand-written sign scrawled on corrugated cardboard: The End is Nie! Reppent Before You Die!
Beulah pushed past the misspelled sign. At the front of the group, two teens wearing rainbow clothes, their faces painted with teardrops and down-turned clown mouths, held a banner printed with you have destroyed our future. Around the border of their banner, they’d drawn pictures of an oil refinery, a ship, a transport truck, and an airplane, all spewing clouds of black smoke. Their eyes rimmed with black eyeliner were as tragic as their mouths.
As Beulah placed her forearm under the scanner at the gate, she looked into the entrance lobby to see who the protestors’ target was. Ah, there she was, a pregnant woman just stepping onto the escalator. It was getting so it was no longer safe to travel the streets anymore. Every day there was another riot, mugging, or car bombing by one faction or another -- the Climate Warriors, Heteros for God, Queer Love, or the End-of-Timers.
Beulah ran up the escalator and arrived on the platform at the same time as the woman. Now that she was beside her, Beulah could see she was probably in her early thirties, with a slim athletic build, coffee and cream skin, and close-cropped tight curls.
“You okay?” Beulah asked.
“Yes. Thanks.” The woman lowered her eyes.
Then she looked up, right at Beulah, and burst out, “It’s my own damn fault! I should have worn a loose jacket or something to cover it.” She waved her hand at her stomach, the bulge visible under a clingy top.
“Not at all,” said Beulah. “There’s nothing wrong with bearing a child. Don’t let those idiots get to you.”
On the street below, they could still hear the chanting. “Shame, shame, you’re to blame!”
“How far along are you?” Beulah asked. “Sorry, I shouldn’t be so nosy.”
“It’s okay. Just three months. But unluckily for me, I’ve shown almost since day one.”
“I’m Beulah, by the way,” Beulah said, sticking out her hand.
“Olivia.” They clasped hands briefly. There was an awkward silence, as if they’d both suddenly recognized how odd it was to be shaking hands with a stranger on the jelly platform.
“Pardon me, I have to go.”
Olivia turned away and tapped her forearm against the control panel of a MePod. The door slid open silently and Olivia got in. There was a sucking sound as the pod moved into the valve chamber, and a swoosh as the pod entered the plastic vacuum tube and sped away.