When I decided to retire, one of the big motivating factors was that I wanted to get my life back. Working sixty plus hours a week left little time for creative pursuits and other other interests. As an administrator, I spent 11-12 hours a day sitting in meetings or hunched over a computer, and did not have enough time for regular exercise, healthy meals, and enough sleep. I especially missed having time to spend with family and friends, a problem that was exacerbated by living far away from the people that we loved.

Since stepping down from my administrator position a year ago, and officially retiring in June, I have loved being able to travel to BC to visit friends and family. Now that we have moved, we are closer to many family members and friends and will have the time to travel to visit those who are not as close by.

Just a week and a half after moving into our new house, we set off on a camper trip to central and northern BC. We attended the beautiful wedding of the daughter of our dear friends. I have known the bride since she was a newborn baby, and fortunately had the forethought to bring kleenexes with me to the ceremony! 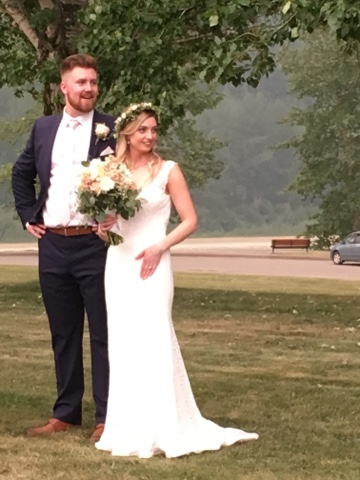 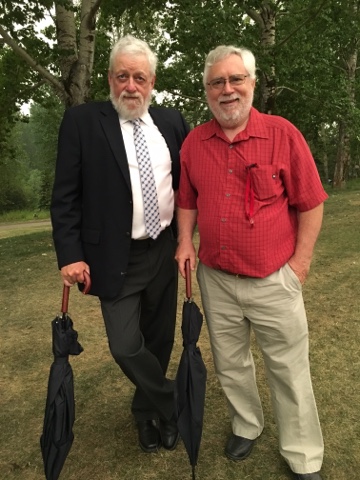 Rob Shares a Moment With the Father of the Bride
Travel to the wedding was not without incident. This summer, BC has been ravaged by wildfires. When we left Vancouver Island, it was shrouded in smoke from fires in the interior of the province. Many communities had been evacuated as the fires encroached on their borders. The highway that normally we would have taken was closed because of wildfire danger. So we took a much longer route, and everywhere that we travelled, the air was full of thick smoke obscuring the sky and the landscape.
The worst of the smoke occurred in Prince George on the night of August 12th. We were at an event and even with all the doors and windows of the building closed, we could smell the choking smoke. When we came out of the building at midnight, apocalyptic ash was raining down from the sky like snow, and all of the vehicles in the parking lot were covered with a layer of black grit. Under the streetlights, the sky was a brown fog, swirling with falling ash. We later found out the the measures of particulate in the air had been off the chart, sixty times the recommended daily average.

On this trip, we visited with our other set of grandchildren. In fact, we were grandparents in charge for a week as their daycare was closed for a summer break. We had fun with the kids, and also with our daughter and son in law, who had just moved into a beautiful new home. We also had a birthday celebration with another son who came for a visit for a few days. 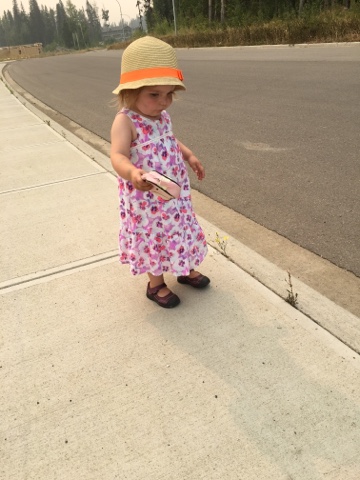 Granddaughter Going for a Walk 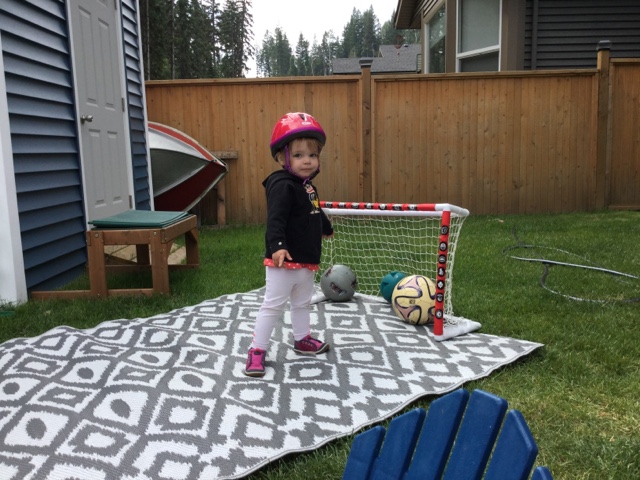 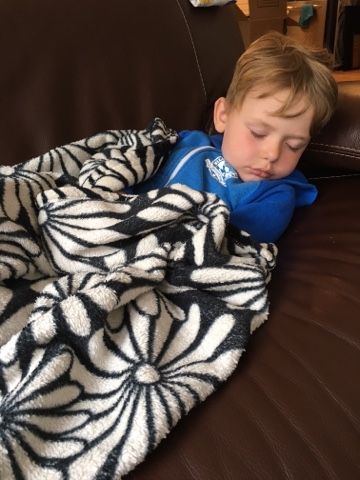 Grandson has a Nap 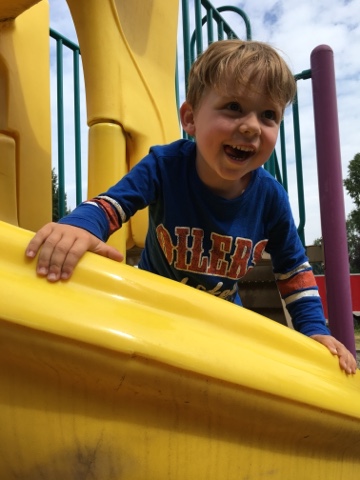 
One of the highlights was taking the kids for a ride on the miniature train, which was followed, of course, by ice cream. Bubblegum was the flavour of choice. 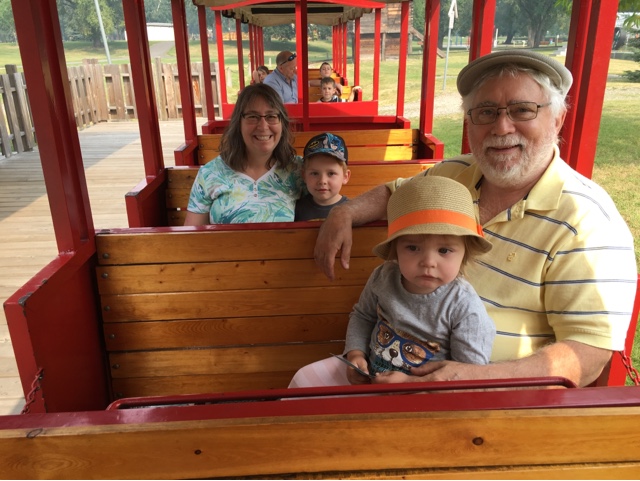 A Train Ride With the Grandchildren 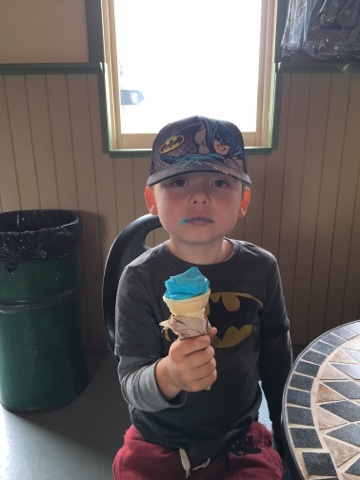 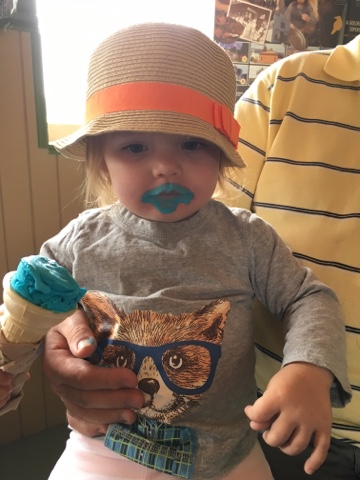 Some Ice Cream Went into the Mouth

We have gone farther down the highway now, and are still travelling. I hope to do another blog post soon about the second half of the trip.
I feel fortunate to now have the time to travel and spend time with friends and family. Having time to spend with people I care about is my retirement bonus. 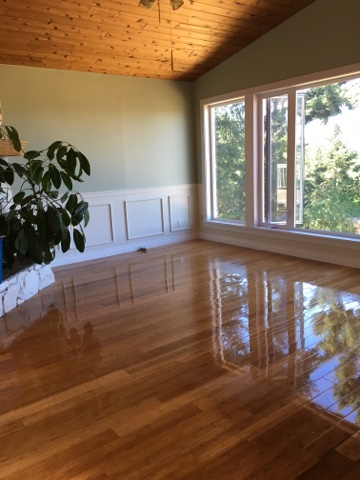 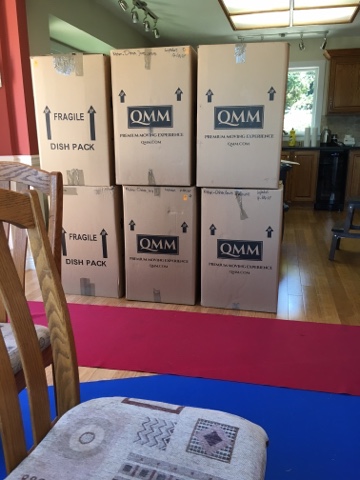 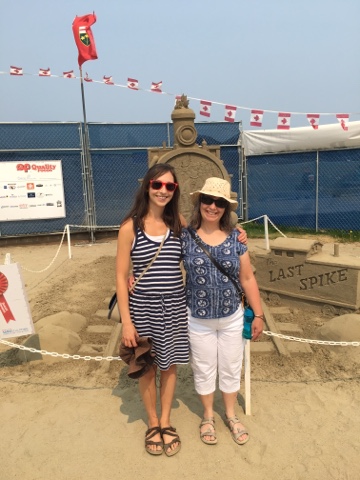