Have you ever broken a thermometer and seen the mercury form little silver balls that roll away across the floor?

I have. I was in grade seven and had taken to carrying a thermometer with me everywhere. I was doing a science project which involved measuring my own temperature at different times of the day and before and after various activities, like running a mile or taking a bath, to see how much it fluctuated and what might cause it to rise and fall.

I was reminded of that mercury yesterday evening. I was standing in my kitchen staring blankly at the empty metal sink; I had just heard some bad news. A single drop fell from the tap, and as the water hit the metal surface, the water balled up like mercury and rolled outwards in a star-burst pattern. I tried to cause another drip to fall so that I could see those little silvery balls again, but I was unable to recreate the event.

Later, out for a walk in the rain with the dogs, I thought about "Rosa," an elderly neighbour in my hometown, a close friend of my mother's. Rosa has just received a diagnosis of multiple cancers; it is likely that there is nothing anyone can do. Rosa is the kind of person who is the heart and soul of the community. At eighty-four, she runs the community soup kitchen, drives shut-ins to their doctor's appointments, and helps her neighbours complete their income tax forms. Seven years ago, during the last two days of my father's life, Rosa showed up to sit by his deathbed, spelling family members off for meal and nap breaks.

On my way home, after a grand loop of the neighbourhood and park, I found myself standing under a street lamp, staring up. There they were again, silver droplets, almost solid. Raindrops arrayed around the light, falling hard, hard. Perhaps it was sleet? I inspected the gravel road, the fur of the black dog, and my sleeve for white scurf, a melting crystalline structure. Just rain. Rain plummeting down.

I followed the dogs to the next street lamp, and stared up once again. The silver bullets turned white before my eyes, and wavered in their fall. On my sleeve a tiny tangled substance, like the skeleton of a sea crustacean, before it melted. I was present for the moment of transformation. Rain to snow, silver to white, bones to oblivion.

The End of Youth

Getting old -- I never thought it would happen to me.

I used to subscribe to a women's magazine that has a section called "firsts after forty." In it, they present profiles of women in their midlife who have taken up some new sport or endeavor, such as snowboarding, ballet dancing, or playing the violin. I find the idea inspiring. I love the challenge of taking up something new. The world is so rich and full of possibilities that I don't know how I can fit in everything that I would like to do in the time left to me on this earth. In the last five years, some of my new avocations have included playing the guitar, fly fishing, back country skiing, wilderness canoeing, greenhouse gardening, mountain biking, and telemark skiing.

Of course, as I am now in the latter half of middle age, I do not have the fitness and stamina to perform these activities at the level of a twenty-something. I don't mountain bike down the technical trails but rather up and down logging roads. The area where I like to back country ski is jokingly referred to by the back country crowd as "the geriatric run." When I garden, for every half hour of heavy digging, I spend another half hour sitting on my bench looking at the garden and daydreaming about it.

Then there are the little aches and pains that become more insistent and limiting over time. The achy back. The sore, stiff knees. When I was twenty, I didn't think that I had had a good day of skiing unless I had taken twenty runs or more. In the last few years, I have aimed for eight or ten runs. I mostly stick to the groomers and only include one or two or three mogul runs or deep powder runs per ski day. I have become used to feeling stiff and sore all the time. Ibuprofen is now my friend.

But I am not ready to give it all up.

I can live with the idea of only skiing half days, and staying off the black diamond runs most of the time. I can even (reluctantly) accept the idea of quitting soccer, as I can see have reached the stage of being a liability to my team in a league of mostly twenty-year-old ex-high-school soccer stars. But I am a skier. I have skied since I was three years old. Being a skier is part of my core identity. A skier is who I am.

This week, the medical specialist whom I saw about my failing knees told me that skiing is over for me. No more skiing. No more soccer. No high impact sports at all. If I stop now, I can delay the inevitable need for a knee replacement. 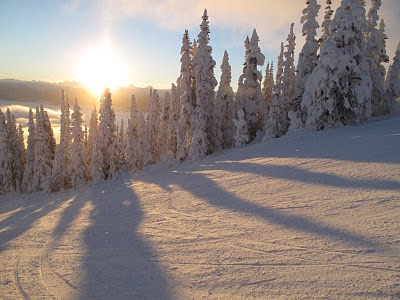 When I am not in front of my computer doing things with words, this mountain is one of the places that I like to be.
Posted by Dr Sock at 12:13 AM 2 comments: