How I Tricked Myself into Retiring 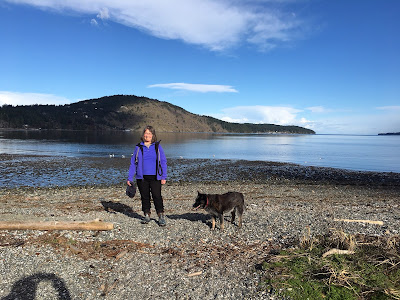 Dear readers, if you have been following posts on my blog, you will know that I am a recent but happy retiree. The person who is most surprised about this is me.

You see, during my career, I was the classic workaholic. I used to joke about it. "I am so busy. I have so much to do. Work, work, work -- that defines my life. I must be a bit of a workaholic."

I used to come home weeping with exhaustion after 12 and 14 hour days, when I had not had time to step away from the computer or eat a meal. We routinely ate dinner at 8:00 or 9:00 at night, because I seldom came home before 7:00 or 8:00 pm. Our family and friends lived far away, and although I made quick trips to visit as often as I could and kept in touch by phone, it was not enough. I was constantly frustrated that I did not have enough time for exercise or creative endeavours. The stress and the pace began to affect my health.

But, for all of that, I really didn't think that there was all that much wrong with my life. Or maybe it was more that I couldn't imagine that there was any other way to be. The big educational institutions where I had pursued my career had socialized me into excessive work as a lifestyle. I looked around and saw all of my peers working the same crazy long hours that I was. As we ran past each other in the hallways, our typical conversations went something like this:

"How are you?"
"Busy. Just unbelievably busy. How about you?"
"Me too. Busy, busy, busy. I'm dealing with the X crisis and the Y crisis, and I thought we had a solution for the Z crisis, but there's a new wrinkle, and it has to be dealt with today."
"Well. I have to go. I have three back-to-back meetings, and I'm double booked over lunch hour."
"Yeah, I'm racing to a meeting too, and I'll be here all weekend for the W event."
"Good luck."
"Take care."

As much as I tried to seek a better balance between my work life and personal life, the work demands were urgent and unrelenting.

Besides, I loved my career. I had spent decades studying and working in different roles within the university system. I was deeply invested in being a professor, researcher, and administrator. I didn't know who I was apart from my work identity. I was afraid of giving it all up, only to discover that my career self was all that I was.

When I began to realize that it was time to retire, I struggled with the decision. I remember that I started to write a blog post around that time called: "Throwing My Life Away." I never published it because it was so bleak and despairing.

Everybody's different, but for me, one part of the solution involved retiring in stages. The other part involved making a cognitive shift. Essentially, I tricked myself into retiring. To find out about my self-trickery, continue reading here.

I am thrilled to have been invited to guest host on Donna's blog, Retirement Reflections, once again. Please visit me there and read my post.

It is less than three weeks until the art show that I will be participating in. The show opens on Friday evening, April 27, with a special event, and it is open to the public all day on Saturday, April 28 and Sunday, April 29. Rob, dear person that he is, has been busy in his workshop building me a modular framework ("hoardings," he calls them) to set up in the 10'x10' booth so that I have somewhere to hang my paintings.

I have lots to do to get ready. As I mentioned before, over several weeks I have spent hours photographing my works, editing the photos, organizing them, and preparing them for my art website that is under development. I unpacked a couple more moving boxes to find some more of my paintings. (I still haven't found all of them.) But there is soooo much left to do to get ready, and I have not been ticking many items off the to-do list.

So what have I been doing if not getting ready for the art show? Well, skiing. The spring skiing has been fabulous. We have been going skiing a couple of times a week with friends, and last weekend I had a chance to ski with my son and daughter.

We also did some house stuff. Our new living room furniture finally was delivered. We replaced and upgraded two toilets. We replaced an item damaged in the move. All of this required much moving of furniture, reorganizing, and cleaning. There have been the usual things like car maintenance, doctor's appointment, tax prep, and grocery shopping. As well, I progressed on some academic writing projects, completing two of them recently.

My service group sponsored an Easter Egg Hunt, which I helped with. I hosted and cooked a family dinner for Easter. As well, I have participated in dog walks, attended a community talk, and spent time with my grandsons. 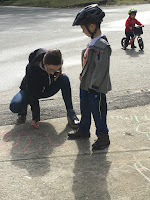 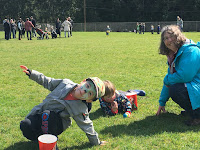 And there's more! Here is some exciting news. A friend and I are part of a new local writing group that has just formed. I recently attended a "meet and greet" organized by the Federation of BC Writers, and the people present at that event decided to organize ourselves into a writers' group. We have had our first official meeting.

I am so excited about writing again that I have resumed working on my novel. I have finished chapter 26 and am starting on chapter 27. I am getting near the end! Of course, once the first draft is done, the revisions begin, and I cannot say that I am looking forward to revisions.

The other night, I wrote until late at night, finishing chapter 26. As I drifted off to sleep, my head was swirling with ideas and fragments of paragraphs to write in chapter 27. But then I woke up with a problem. (I guess my brain had been working on the novel while I slept.) I realized that my timelines did not line up properly for the plot to unfold the way that I had planned.

You would think that in a novel that takes place decades into the future, timelines would be pretty flexible. However, throughout the book, I have been building a world. And in the logic of this world, I have created the necessity for certain events to unfold a certain way.

There were two main time sequencing issues. Two characters are having babies, a couple of months apart from each other. Somehow, I had miscounted the due date for the first birth by several weeks. I couldn't just change the date easily, because I had already written about the birth and tied it closely to a certain season of the year. I had also miscounted the due date of the second birth, in this case only by about two weeks, but this also was problematic because I am intending for the mother to be doing something during the plot climax that is very physically grueling, and she would not have planned to do it if she had just given birth. Just as in real life, these fictional babies are being born at inconvenient times!

So the next day, instead of steaming along writing chapter 27, I spent hours recalculating the math for the dates of the births and other events. I corrected my timeline notes. Then, I went back and read through several chapters, and made corrections so the timelines would work out.

With this novel, I have kept a number of files of notes, supplementary to the novel. I have a list of characters with details like their age, appearance, relationship with other characters and so on. I have made a timeline of major social and political events in my imaginary world, both preceding and following the period in which my story takes place. I have written notes about the backstory. I have a list of chapter names along with the page of the manuscript on which each chapter starts.

Some of my notes are very messy and scribbled. For example, I have drawn a rough map of the geographical area where my characters live. About two chapters into the writing, I realized that I needed to keep a timeline of the major events in the story, which takes place over the period of a year. I labelled the day on which the story starts as "Day 1." Quite a bit further along in my writing, I realized that seasons were going to be important in this imaginary world, so I went back and re-labelled Day 1, Day 2, etc., with dates, arbitrarily starting the story on November 16. Although I had a rough plot outline when I started this novel, I mostly have invented the story and the details of my story world as I went along.

For those of you who write fiction, how do you keep track of events and their sequence in a piece of writing as long and complicated as a novel? I would be curious to know about your method. I imagine that dates would be especially tricky to manage in historical fiction, and also when writing a memoir or biography. I look forward to your comments.

And, yes, I am avoiding doing my art by writing instead. Perverse, I know, but at least the creative juices are flowing.
Posted by Dr Sock at 3:08 PM 14 comments: