Visual Gifts from the Natural World

I was over at Robot Nine tonight, and I wanted to share a couple of lovely images from that website. Their catch phrase is: "Funny Stuff! Daily Updates!" They do post lots of humorous images, but they also feature images that are powerful and offbeat examples of visual art. 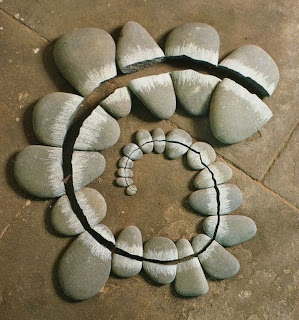 This first image is called Cracked River Stones. It was posted today, September 27. Those of you who read my earlier post about river stones might remember why I am drawn to this photo. I like the way the artist has used chalk on the stones to enhance the spiral, calling to mind the chambered nautilus, the garden snail, and the human cochlea. 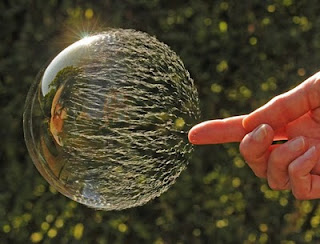 This next image was posted September 19 and is called Soap Bubble in Mid Burst. This one pleases me because of the way it has frozen the action, allowing us to see the bubble in a way that we usually cannot. Bubbles are there, and then they are not, and this is one of the things that fascinates us about them. This image is existential. It is about time. And it is about the moment of transition, something I wrote about previously in Rolling Balls of Mercury. 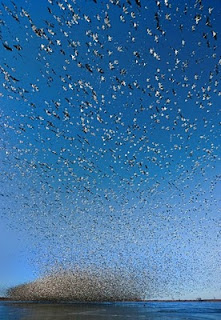 This third and last image, 1.3 Million Birds speaks for itself. This one was published on Robot Nine on September 8. What I see in nature never ceases to fill me with awe. Our little human attempts at creativity and building our world seem so piddling in contrast. Just look at all those birds!
Posted by Dr Sock at 10:29 PM No comments:

Groceries and the Empty Nest

Three weeks ago, Rob and I took my youngest off to university. We got him all moved into residence, did a major grocery shop at the supermarket nearest to the campus so that he would be well-provisioned for at least a week or two, went out for a special family dinner, and then waved good-bye. Until Thanksgiving. Thanksgiving seemed to this new empty-nester like a very long six weeks into the future.

I was prepared to be sad. I thought that I might cry a little on the seven-hour drive back home. I knew that I would feel a deep need to phone him (or at least text him) daily. I kind of expected the feelings of glumness and irritability. I wasn't surprised, once we arrived back home without him, that the house seemed way too big and unnervingly quiet.

But I was surprised about the groceries. Apparently Rob and I don't eat anything to speak of. When we left to take my son to university, the fridge and cupboards were quite bare. I knew that I would have to shop the minute I returned home.

Well I didn't. And I still haven't. Yes, we've run out to pick up a couple of small items a couple of times: bread, milk, eggs, beer, and cat food. But that's about it.

I used to to be that woman you'd see in the grocery store late at night, racing up and down the aisles just before it closed with a hugely overloaded cart. I'd have all the usual stuff: two big jugs of milk, several packages of meat, four or five types of fresh vegetables, two or three types of fruit, the giant economy slab of cheddar cheese, and bulk sized boxes of breakfast cereal. And, I admit with a blush, there were several kinds of junk food and prepared foods in the cart too: frozen pizza, cola, chips, cookies. A week or ten days later, there I would be, back in the grocery store doing it all over again.

As it turns out, Rob and I weren't eating that much of the cartloads of groceries. Since the end of August, we have been getting along just fine on the frozen salmon in the freezer that we caught during the summer, the various veggies offered up by my little weed patch of a garden, and the apples that are now ripening on the trees. Regular sized boxes of crackers or cereal now last and last. Whatever I buy stays in the cupboard or fridge, and is still there when I go to cook dinner. I look into the pantry and can't imagine how I will ever manage to use up all those cans and boxes of stuff that I see there. I may never need to shop again!

Type A Version of Life Balance

What a week! This week at work was like skiing a black diamond mogul run: hard, fast, having to make crucial decisions in rapid sequence with the likelihood of poor choices having unpleasant consequences, and simultaneously needing to maximize my physical, mental and emotional performance. And I loved it.

I thrive on challenge, and languish during times of boring routine. I become downright morose when thwarted in my plans and projects, easily sinking into a state of discouragement and lack of self-confidence. Facing challenges gives me a sense of agency, and so I like to manufacture challenges for myself. This benefits my employers because they get lots of creative, effective work from me.

When people write about trying to achieve a balanced life, they usually recommend pulling back from a frenetic pace at work, and making more time for personal, social, and recreational pursuits. And I deeply value those dimensions too (although I have to admit that I sometimes tend to engage in the personal components of my life with much the same intensity as I do in my work life, like skiing moguls).

For me, I think balance is not simply about working fewer hours or taking a more laid-back approach while working. I think, instead, it's more about finding a rhythm. I fling myself into projects, work my guts out, revel in the intensity of complete immersion, and then bring that project or period of work to a temporary lull or rest time. Using the skiing analogy, this would be the time at the bottom of the hill when I standing sweating in the lift line chatting with others and then ride the chairlift back up, admiring the view.