I Cleaned the Toilet

Today I cleaned the toilet. Not only that, I also wiped down the bathroom counter and scrubbed the sink. I also did the laundry. I baked a cake. I went shopping. I cooked supper. These things feel like a huge accomplishment.
You see, six weeks ago today, I broke a bone in my foot. To be exact, it was a Jones fracture of the fifth metatarsal bone. My left foot is in an air cast. I have been getting around on crutches for six weeks.
As anyone who has ever been on crutches can attest, it is not all that fun. For the first three weeks or so, I could not put any weight on the foot at all, even to balance myself. I quickly discovered that I don't have very good upper body strength. My shoulders, arms, and wrists became very sore from hoisting my weight around on my arms. My right leg, although quite strong, and my right foot ached from bearing all my weight. I was quite unsteady on the crutches. Going between buildings at work, usually a short walk and sometimes a longer walk of up to a kilometer, became next to impossible even for nearby buildings, especially if there were stairs involved.  I could manage only one trek a day of up to two blocks each way and that took lots of time and sweat.
I discovered that there were so many little ordinary things that I could not do for myself. For example, because both hands were on my crutches, I could not carry a file folder or a cup of coffee. I had to leave a light on at night because I did not feel safe moving around on my crutches in the dark.
I discovered lots of strategies to cope with my lack of mobility. I rescheduled meetings to my office whenever possible. I obtained a disabled plaquard so that I could park close to buildings. I had Rob move a chair into the bedroom so that I could sit to dress myself, and I learned to lay out all my clothing within easy reach. Similarly, Rob put a plastic stool into the shower so I could sit to shower. Getting ready for work in the morning took so much longer. Wherever possible, I simplified things - no hair products, no scarves, little or no jewellry.
I have spent a great deal of time this last six weeks either at my desk at work or on the couch at home with my foot up. I have missed a beautiful autumn, unable to go out and walk, cycle, or garden. I have stopped painting (except once). I have stopped shopping, except once with Rob's help. Initially I couldn't cook, then I began some limited cooking with Rob and Alex helping (although with a team effort, we did have a full turkey dinner on Thanksgiving). Initially, I could only do the laundry with someone to help by carrying the laundry baskets, and then I mastered pushing the basket along the floor with a crutch.
Finally, this week I have been able to put significant weight on the left foot in the cast. I am putting most of my weight on my heel, not on the whole foot. I can get around in the house with only one crutch. I can even take several steps without a crutch. It is so wonderful to have one or both hands free! I can pick up the laundry basket and carry it. I can cook a whole dinner without help, including bending down to lift hot things out of the oven. Today, for the first time, I was able to carry a cup of tea from the kitchen to the living room, which involves going down three steps. Today I also went shopping by myself.
Probably I overdid it a bit today, as my foot is quite sore tonight and swollen.  But it is so wonderful to be recovering, and to be able to to do even mundane things again, like cleaning the toilet. It has helped me appreciate the little ordinary things of life and see them not just as unwanted chores but as the elements of life that make up my existence in the world. 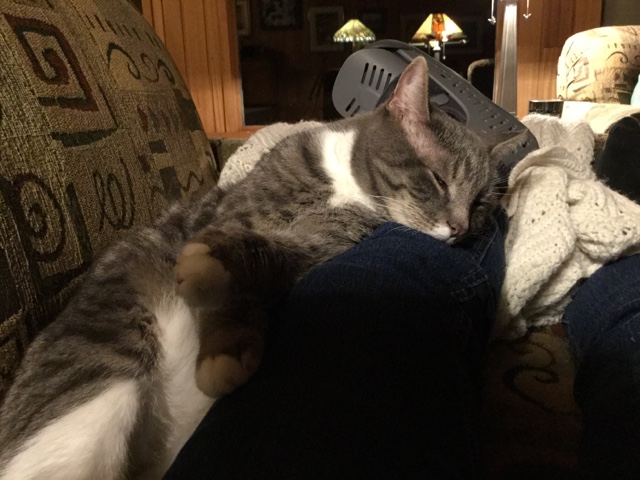 I am reading a book called The Art of Memoir, by Mary Karr. It is a book on writing, specifically about writing memoir. Karr has written three best-selling memoirs helping to popularize the form, and also has spent more than three decades teaching a writing course on memoir. A fundamental premise that is central to memoir, Karr says, is that a memoir demands truth.

She goes on to talk about what she means by truth. She says that "you're seeking the truth of memory -- your memory and character -- not of unbiased history" (p. 11). That is, the truth is not objective truth but the writer's or narrator's truth. She addresses ways in which the mind can be "wiggly" and not fully remember some scenes or events in detail, and also how retold memories (remember the time you did xyz) can insert themselves in your memory as if they were your real memory of the original event. She talks about how the writer can and should signal areas of doubtful memory rather than fictionalizing or, as she puts it, lying to the reader. To be a memoir, the acount must be true. Nothing else will suffice.

Although I agree with Karr that a memoir must yearn toward an accurate recounting of a remembered event, and that this is how it differs from fiction and also creative nonfiction, I believe that one's memory does not record a "true" record of any experienced event. Rather, even the very first time a person tries to recall an event that occurred, he or she creates a narrative of the event, and that first narrative already has shaped the memory of the event. Essentially, the event has been turned into a story.

The memory of the event shapes the narrative, and the narrative in turn shapes the memory. With each recall or retelling, the story (and thus the memory) evolves and becomes a little different than it was the previous time. Perhaps the individual doing the recalling now has some new piece of information that sheds a different light on the past experience and therefore gives the memory of it a somewhat different gloss. Or perhaps the memory story is told a particular way to suit a certain audience (e.g., a daughter, or a lover, or a social worker). Or perhaps the adult recalls the event with different developmental insights than the child would have had. Or the event may be remembered differently when one is exuberant and happy than when at the bottom of a pit of depression.

These different variations of the remembered event layer over each other and each can feel true. Sometime multiple competing versions can feel true simultaneously, or sometimes only the most recent reworking is the memory that feels most true. It may be that there are a few core elements that do not change -- the image of the way the knee was twisted at an unnatural angle, let's say, or the three words the narrator screamed as she ran from the room. But the remaining details and interpretations will vary over time. This slipperiness of memory makes the capturing of one precise truth challenging for the memoirist.

Consider that as autobiographers, each of us tells a story about our own life that gives our lives meaning. That means that our life story (and therefore the memories it is based on) will be shaped differently depending on whether we see ourselves as the hero, the villain, the victim, the incompetent, and so on. We benignly leave certain bits out and highlight other bits that support this point of view.

I know that my own life story and my view of myself as the protagonist of my life changes depending on circumstances. For example, I may have led a highly successful project to completion at work recently and received accolades, and for a time, I will tend to recall memories or reshape memories that support my current view of myself as indispensable and a heroic problem solver. Or perhaps someone breaks into my car overnight while it is parked right in my own driveway, and it happens to occur the same week that someone steals my purse out of my office at work. I may for a period of time see my protagonist self as a victim, and begin recalling those times in my childhood that I was taunted at school, or beat up by a sibling, or scapegoated by a teacher. I will call memories to mind that support this new victim view of myself, but also I will inadvertently reconstrue memories to glean evidence for this current view of myself.

So, I have argued that while a memoirist might strive for the idea of truth, truth itself as presented in one's episodic memories is not that easy to pin down. As a writer, the truth that I reach for is emotional truth. How did I feel when that experience occurred? If I can nail that emotional truth, I am less worried about getting all the facts and sequences right. And as I recount that past event, I also want it to be a good story. That might mean that I compile a series of observations that took place over time into one scene. Or that I have an antagonist say something that perhaps he did not actually say in exactly those words, but that would have been typical of what he would have said. So maybe I'm just not a memoirist, but really a novelist writing novels that are based to a greater or lesser extent on memories.