A Tour of Vancouver Island

I am finally writing a long-promised post about our beautiful summer vacation. We have now lived on Vancouver Island for more than two years. We decided that this summer, it was time to get to know our new home a little better.

We live along the east coast of the Island in an area that is considered to be the central part of the Island (even though it's quite close to the southern end). In late July, we set off in our truck and camper rig to explore the less-travelled roads of southern Vancouver Island.

Our first destination was the Cowichan Valley. We camped for three nights along the south shore of beautiful Lake Cowichan.

There were two small islands in the lake not far from where we camped. We went out in our belly boats and spent several hours fishing around and between the two islands. We didn't get a single bite. The people camping next to us caught some fish, though. They said the fish were out in the middle of the lake and very deep.

Most of the time we were at Lake Cowichan, it was quite windy. So we did some short hikes and read books on the beach and enjoyed camper cuisine.


On our last day, we drove into the community of Cowichan Lake, and explored some of the rail trails -- old railway lines that have been turned into hiking trails -- that wind through the area. We hiked a section of the Trans Canada Trail.

The Trans Canada Trail is a network of trails that stretches all across Canada, with many parts still under development. Over the years, I have hiked or cycled on several segments of this trail, especially in the Greater Vancouver area, Nanaimo, and in the Kettle Valley.

The section we were on runs between Cowichan Lake and Shawnigan Lake, about 20 kilometers. (We only went about 5 km, then doubled back).

Leaving Cowichan Lake, we followed the Pacific Marine Highway southwest toward Port Renfrew on the west coast of Vancouver Island. Along the way, we stopped and camped at a beautiful little campground at Lizard Lake. The lake got its name because of the salamanders that live in the lake. I sat quietly beside the water peering in and was rewarded by seeing a couple of the salamanders swimming in the lake water.

There is a nice hiking trail all around the lake. We saw evidence of past logging activity in the form of giant stumps. The lake is stocked with rainbow trout, and we enjoyed fishing in our belly boats. As well, there is a swimming beach.

Our next stop was Port Refrew. This campground brought on nostalgia, as we camped beside the Gordon River, exactly where I camped nearly 40 years ago when I was setting off to hike the West Coast Trail. The West Coast Trail is a 5-7 day backpacking route through the Pacific Rim Park on the west coast of Vancouver Island. Is is famous as a world destination for backpacking.

Rob and I spent an afternoon hiking a section of the Juan de Fuca Marine Trail starting at Botanical Beach, which is its most westerly trail head. This was a real highlight of the holiday for me. I loved the rock formations, the tidal pools, and the wild beaches. Botanical Beach is reported to be one of the richest areas of marine tide pool life on the west coast of the Island.


Here are two pictures of Rob.

He is hiking over the layers of rock to the tide pools. In the other photo, if you look past the pile of kelp, you will see him sitting on the rocks.

We enjoyed our lunch sitting on the rocks, basking in the sun, and absorbing the sounds and sights of the shore.
This was an excellent afternoon. It was the first time that I have hiked any part of the Juan de Fuca Marine Trail. I would like to hike the whole 47 kilometers of the trail someday, maybe section by section.

We finished our hike by doubling back to where we started, and then hiking the Botanical Beach to Botany Bay 2.8 km loop.

After that, it was time for some refreshments. So off we went to the Port Refrew Hotel for a pint and some delicious west coast seafood. 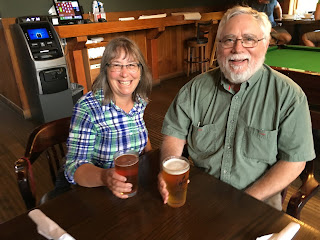 We spent the last few days of the trip at Jordan River, camped right along the beach looking south over the Juan de Fuca Strait at the Olympic Peninsula in Washington State. Jordan River is a surfer's paradise in the fall and winter when the waves are big. But at the beginning of August, there were no surfers to be seen -- just a lot of seagulls.

We spent an afternoon hiking into Mystic Beach, another famous destination along the Juan de Fuca Strait.

Unfortunately, the hike has become too popular. The trail has been severely eroded, and there were a lot of people along the trail and at the beach. It is a beautiful beach, however. Also, we got to cross a suspension bridge along the trail.

We really loved our beach campsite at Jordan River. There was a quaint coffee shop up the road, and a Little Free Library. That was a good thing because I had read all the books I brought and was in need of more reading material!

After more than a week on the road, we headed for home. We bypassed Victoria, not in the mood for an urban experience after the peacefulness of the wilderness. But, our holiday wasn't finished yet! We spent a few days at home gardening and doing laundry, then we headed off on another adventure. So, dare I say, there's more to come?
Posted by Dr Sock at 11:33 PM 18 comments: