Fall At Police Outpost, oil on canvas board 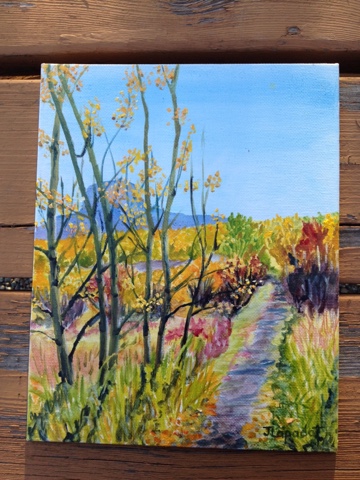 Today was one of those fabulous early Fall days with the sun shining brilliantly and all of the trees in colour. We went to Police Outpost Park, a beautiful place at the foot of Chief Mountain, Montana. On the Canadian side of the border, this park has lots of history. During Prohibition, it was an outpost of the Northwest Mounted Police, who were stationed here to intercept the cross-border trade in whiskey. Some of the original log buildings are still standing.

It is also a great place to hike, camp, fish, and paint. It is hilly and has a large lake, several smaller lakes, forested areas, open fields, and some marshland. It is an important nesting area for birds, including species like the mountain bluebird, common loon, eastern kingbird, American golfinch, common snipe, and the sandhill crane. It is on the western edge of the prairie flyway for migratory birds. In the past, Rob and I have explored all of the trails on our mountains bikes and on foot.

Sadly for me, I have broken a bone in my foot. My left foot is in a cast, and I get around by hobbling on crutches. So this afternoon, while my companions went off on a hike, I set up my painting things on a picnic table and painted a small plein air painting of the fall colours. For a quick little painting, I am fairly pleased with it, although if I had had more time, I would have added some shadows to the path and made it a little less straight, and also worked on the grass, trees, and shadows on the righthand side a little more. But the light was going, my companions had returned from their hike, and the temperature was dropping, so I signed it and that was that.

It was a lovely day. The final bonus of the day was that as we drove back, we had the opportunity to see the super moon go into full lunar eclipse. It was an amazing sight, something that only happens every few decades, and something I have never witnessed before (I have seen a super moon, and I have seen an eclipse before, but not an eclipse of the super moon.) Also know as a blood moon, in our sighting, the moon was huge and yellow, not red.