Well, "cities" might not be quite the right word.

As I wrote in my last blog post, I have just returned from a yoga retreat in Crete. As well as meditating and doing lots of yoga everyday, we went on a number of excursions to explore historical and fascinating areas of Crete. The first two excursions were to the Palace of Knossos and to Matala.

The Palace of Knossos

The Minoan city of Knossos on Crete is thought to be the oldest European city. It is located only a few kilometers from Heraklion, the largest contemporary city on Crete. Probably inhabited from neolithic times, this bronze age city was the centre of Minoan civilization. The first Palace of Knossos is thought to have been built around 2000 BC, and at its height, the palace and surrounding city had a population of 100,000 people. The total inhabited area was 10 square kilometers. The palace was abandoned around 1300-1100 BC.

The Palace of Knossos was rediscovered by British archaeologist Arthur Evans. Excavations began in the early 1900's. Today some sections have been restored. My photo below shows the restored north entrance. There is a fresco that depicts a charging bull partially visible behind one of the columns.

The Palace of Knossos is famous in Greek mythology because of the legend of the Minotaur. The Minotaur was a creature that was half man and half bull who was kept at the centre of a labyrinth constructed by Daedalus underneath the palace on the orders of King Minos. Theseus entered the labyrinth and fought the Minotaur. Theseus was able to find his way out of the labyrinth by following the thread given to him by Ariadne, the king's daughter. Then Theseus and Ariadne fled from Crete.

I can't believe I was actually there, in this historic place I had read about in books!

On the afternoon we were there, it was very hot, or so it seemed to this northern gal. After we had wandered all over exploring the ruins, Theo gathered us together in the shade and led us in a meditation. He had us visualize entering the labyrinth. For me, this and the subsequent meditations were powerful experiences.

A few days later, we travelled to Matala on the south coast of Crete. The cliffs of Matala have many caves, ranging in size from small ones that could fit a couple of people to the ones the size of a large room. It is not known how the caves came to be there, but it is most likely that humans dug them out to use for habitation. In the 1960's hippies descended on the community and lived in the caves.

We made use of one of the caves for our daily meditation session, much to the consternation of some swallows who had nests on the cliffs.
After we came down from the caves, our group split up. I went with three others to have a cold drink in a beachfront bar. Then we explored the little town.

The hippie presence was everywhere, from the colourfully painted sidewalks, to VW vans parked all around and represented in murals, to tributes to John Lennon painted in the square.


We had a lot of fun browsing in the shops. But at this point, we didn't dare buy anything because we had no suitcases in which to bring stuff home! (Click to read about the lost suitcases.)
After shopping, we went for a swim in the Libyan Sea (the part of the Mediterranean Sea south of Crete). The water was so refreshing -- a wonderful feeling on a hot afternoon. Theo's tent provided some welcome shade.
We ended the day with a beautiful dinner at the Sunset Taverna, so named because it offered a spectacular view of the sun going down. After dinner, we walked back to the beach and I took the photo below. Idyllic. 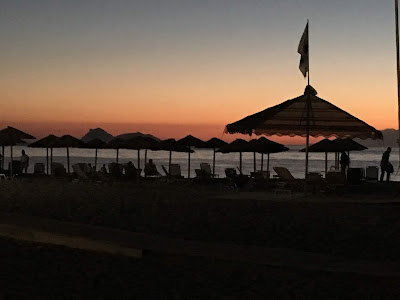 A Beautiful Sunset
But, the day was not over yet. We still had a long drive back in the dark to the place we were staying, over mountains and around hairpin turns. We stopped high on a mountaintop and all got out of the cars to look at the stars. It was an amazing day.

I have just returned from a yoga retreat in Crete. I went with my daughter, K, and it was absolutely fabulous.

I loved Crete, which I have never visited before -- the beautiful rugged island, the generous people, the turquoise water, and the delicious food. I loved the retreat, which included daily yoga practice in the morning, brunch, excursions to beaches and historical sites, daily meditation, and dinners featuring excellent local food.

Nura (our yogi) and Theo (a psychotherapist from Greece) were our fearless leaders, instructors, and tour guides. The seven participants travelled from Canada and Switzerland to take part, and they were a warm, wonderful, fun bunch of people to spend a week with. And, best of all, I got to go to Crete with my daughter!

The first thing that happened is that our luggage did not arrive on Crete. Apparently, there was a baggage handling problem at Schiphol Airport in Amsterdam, and 60% of the people on our flight arrived at Heraklion in Crete without their luggage. We were among them.

We arrived at 8:30 in the evening after 24 hours without sleep, to discover that our bags were not on the carousel. Theo and Nura were at the airport to pick us up, but we couldn't leave because we had to stand in a lineup for two hours to file a lost luggage report.

The next day, the luggage did not arrive either, and our yoga retreat group was leaving to drive across Crete to a remote village on the south side of the island to our retreat location. We were wearing jeans, T-shirts, socks, and running shoes from our flight the previous day that were none too fresh. Although we'd each had the foresight to put a couple of spare clothing items in our carry-on backpacks, we did not have hats, sunscreen, sandals, or light summer clothes, and it was hot there! We also didn't have our yoga clothes, yoga mats, toiletries, or bathing suits.

So, we tore around Heraklion to try to buy a few essentials, as the area where we would be staying for a week did not have stores. But it was Sunday, and everything was closed, except for a few tourist stalls. Nevertheless, we managed to find some light clothes, and, amazingly, the last store we looked in also sold bathing suits and underwear.

I had just finished publishing a blog post in which I announced that I was imposing a clothes shopping moratorium on myself. I think the universe was laughing at my good intentions!

The wonderful people at our yoga retreat were so kind, lending us yoga pants, other clothing, sunscreen, and yoga mats. I accepted that I would never see my suitcase again. I was managing to get by just fine with the little I had, and I wondered why I had thought I had needed all that stuff I'd packed in my suitcase.

And then, four days later, our suitcases showed up, having been delivered by taxi from Heraklion. A surfeit of clothing!

A Beautiful Place To Be

We stayed in a family-run inn in a tiny hamlet. It was situated across the street from the Mediterranean Sea.

In the photo of the inn above, our room was the middle blue-painted one.

Every morning at 8:00 or 8:30, we did 1 1/2 hours of yoga on the terrace under the bamboo umbrellas. Then our hosts served breakfast at a long table under the umbrellas. Some days, they set up the tables right beside the sea, under the shade of big trees.


The Yoga and Meditation Sessions

I attend a weekly yoga session with Nura Madjzoub (and I also go to a yoga studio in my neighbourhood once a week). Nura takes a holistic approach, which really resonates with me. I am still a beginner, and I find that yoga has added an important dimension to my life.

Several times a year, Nura offers yoga retreats in international locations. I was thrilled when my daughter and I committed to attend. I have never done anything like this before.

Nura collaborated with Theo Kyriakos to offer the retreat. Theo is presently based in Greece, and he was our cultural guide as well as our meditation instructor.

Nura and Theo organized the retreat around the theme of harmony, specifically the five elements: earth, water, fire, air, and ether.

They were also great fun to be with, as you can see from this photo of Nura hamming it up in front of the Temple of Apollo, and Theo making a funny face for the camera.

After six consecutive days of 1 1/2 hours of yoga, I was a little sore, and very tired. But I loved every minute of it.

After yoga and breakfast each day, we went on an excursion, either to the beach or to a historical location. After fun and frolick in the waves, Theo led us in a guided meditation. We explored our shadow side. I found the meditation experience very powerful. The meditations left me with lots of images and ideas to explore further.

Most evenings, we ate a late dinner at Taverna Kriti, a local family run restaurant, where we sat at a covered patio beside the Mediterranean. The food was fabulous. The last night, George made us a longtime family recipe: goat with wild artichokes, simmered all day in an egg yolk and lemon sauce. He raised the goats. He picked the artichokes himself up in the mountains. I can't believe I forgot to take a picture of it.

I leave you with one final image that says it all: eating watermelon in the sea.