A Plan to Reverse Global Warming

In a recent blog post, I wrote about my sense of helplessness and personal paralysis as I considered what I can do to help address global warming and climate change. The problem is huge and multi-faceted, and change on a global scale is urgently needed for humanity's survival (or, perhaps more accurately, the survival of human civilizations).

As a single individual, I cannot solve climate change. But I can do my small part to make a difference, to the best of my ability.

So where should I put my efforts? What actions would have the biggest impact, match my particular knowledge and skill set, and be within the scope of what I can actually accomplish?

Although I have been slowly educating myself about the challenge of global warming facing us as a species, I decided that I needed to do some reading about not just the challenge facing us, but about possible solutions.

So I ordered the following book from the library: Drawdown: The Most Comprehensive Plan Ever Proposed to Reverse Global Warming. It arrived a couple of days ago. This book, edited by Paul Hawken and published in 2017, was a New York Times best seller in 2018. There also is a website that is even more extensive and up-to-date than the book at www.drawdown.org.

So what is "drawdown?" The website defines it this way: "Drawdown is that point in time when the concentration of greenhouse gases in the atmosphere begins to decline on a year-to-year basis." Once greenhouse gases begin to decline, the warming of the planet will begin to reverse.

The book sets out 100 global strategies, which, if we implement them all by 2050, will enable us to reverse global warming. The strategies are in the following categories: Energy, Food, Women and Girls, Buildings and Cities, Land Use, Transport, Materials, and Coming Attractions (promising future technologies and solutions).

All of the approaches (except the last category which is more speculative) already exist and have been rigorously researched and modeled by a team of more than 200 scientists and other specialists from around the globe. Each one is ranked in terms of how many gigatons of carbon dioxide (and other greenhouse gases) will be reduced by 2050 using that solution, an estimate of how much it will cost to implement, and what the net savings will be. By reduced, I mean either CO2 that will be removed from the atmosphere, or CO2 that would be added if we continue on our current course but that we will avoid adding if we use this solution.

In the book, they have adopted a conservative bias -- that is, left room for error if the proposed solution is not quite as effective or adopted as readily as the scientific evidence suggests is plausible.

Upon receiving the book, I looked at the Table of Contents and how the book was organized. I read the brief Forward that described the purpose of the book and the assumptions they worked within. Then I flipped straight to the back of the book and read the table of statistics (yes, I'm a nerd).

The numbers show that, by 2050, in the Plausible Scenario (the outcome that we should be able to achieve with good effort), we will be able to reduce 1,051 gigatons of carbon dioxide. That will not get us to drawdown or reversal of global warming. In order to reach drawdown, we will need to reduce carbon dioxide by 1442.3 gigatons. This is the Drawdown Scenario, and they describe how it can be achieved. They also show an Optimum Scenario -- one where we are able reduce carbon dioxide by 1612.9 gigatons.

I also skimmed through the brief bios of the 200 scientists and other experts from around the world who contributed to this research and plan.

My first thoughts on getting this far with the book were:
I also appreciated that the book is very engaging and interesting to read, not dry and technical as so many reports about climate change and policy frameworks tend to be. It is beautifully illustrated with photos of different landscapes and cultures around the world.

So I dived into the meat of the book.

I decided to start with the section on food, because I am very interested in food.

I was surprised to learn that a broad-based switch to eating a plant-rich diet is one of the most effective ways of reducing greenhouse gases -- ranked 4th of the 100 solutions. They point out that our "Western diet comes with a steep climate price tag," noting that raising livestock accounts for 15 to 50 percent of current greenhouse gases emitted each year. A large proportion of this is because of the deforestation that takes place in order to create grazing areas for cattle, in particular.

They report that the average Canadian and American eats more than 90 grams of protein each day, much of it from meat and animal products. An adult's daily protein requirement is 50 grams and all or most of it can be obtained from plant-based foods.

They recommend reducing meat consumption and avoiding overeating by restricting calorie intake to 2500 calories per day, on average. Citing Thich Nhat Hanh, a Zen master, they say, "making the transition to a plant-based diet may well be the most effective way an individual can stop climate change."

As I have written here before, I eat a healthy well-rounded diet that includes meat. But this book convinces me that reducing my meat consumption is something immediate and positive with respect to climate change that I as an individual can do.

Another astonishing source of CO2 in the atmosphere is from food wastage. More than a third of the food we grow or raise every year in the world is thrown away, primarily in high-income economies. Yet around the world people are going hungry.

The wasted food contributes the equivalent of 4.4 gigatons of carbon dioxide every year. If we used the food instead of throwing it away, globally we could reduce the need to clear more land to grow food, which causes deforestation. Reversing food wastage is ranked third of the 100 solutions in terms of carbon dioxide reduction. If by 2050 we only threw away half as much food as we do presently, we could reduce CO2 by 70.5 gigatons, they say.

Some of the other topics I have read about include farmland restoration (#23), clean cookstoves (#21), multistrata agroforestry (which means planting crops under trees) (#28), improved rice cultivation (#24), growing rice using the system of rice intensification (#53), and silvoculture (grazing livestock in forests) (#9).

There are still several other strategies that involve food and agriculture that I have yet to read about. It is interesting to discover that so much of our greenhouse gases come from our systems for raising and handling food.

Michael Pollan's advice: Plant a food garden in your yard or community. Because of our industrialized approach to agriculture, every calorie of food produced requires 10 calories of fossil fuels to produce it. Therefore, he says, growing your own food is one of the most powerful things you can do.

To me, the reason that it is imperative to take action is that the well-being of future generations rests on the choices we make right now. Every month that we delay, we pump more greenhouse gases and particulate into the atmosphere. Some of them, like carbon dioxide, remain in the air for decades or even centuries. Others, like black carbon, only stay in the air for eight to ten days, but hugely accelerate the warming effect when they are present.

Taking action now means that our grandchildren and our loved ones' grandchildren will inherit a beautiful world in which they can thrive. The alternative, if we do not take action, is too horrible to contemplate.

I'll leave you with some photos of me on a recent hike with my son and daughter. 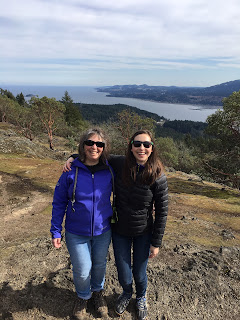 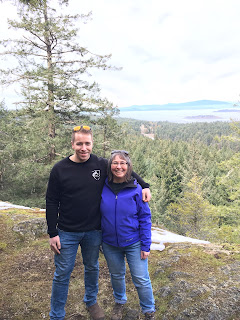 The Birds Are Back

One of the joys of living in a semi-rural area is having forests, meadows, and small lakes and ponds all around, right outside my door. Moreover, I live on a peninsula which is about two and a half kilometers wide, so in every direction, the ocean also is near at hand. The whole peninsula is criss-crossed with hiking trails, and there are small parks with beach access all around its perimeter.

These are all things that I really like about living here. Another nice aspect is that the community is quite small -- about 5,000 -- and friendly. There are several residential neighbourhoods, but overall, it is a mixed use area that includes farms, a small commercial "town center," and some industries such as an oyster farm and a timber-sorting facility.

Only two and a half weeks ago, our backyard was still full of snow. Although Vancouver Island does not get much snow compared to the rest of Canada, we live up on the north side of a large hill. So we get a little more snow than many other Islanders (which is fine with me).

Weather permitting, I go out and hike on the nearby trails several times a week. With a number of days of sunny weather, most of the snow has vanished. I was delighted to hear many birds twittering and calling in the forest last week. The birds are back, having returned from their winter migration. I hadn't realized that I had missed their singing until I heard it again.

We live with wild animals all around us. Some of the animals I have frequently seen or heard right in our neighbourhood include: deer, rabbits, owls, eagles, hawks, raccoons, seals, sea lions, and several kinds of ducks and geese. Of course, there also are ravens, seagulls, hummingbirds, and many other types of birds.

My son spotted a cougar at the entrance to the trails last winter. I have seen bear tracks and bear droppings, although I haven't seen an actual bear here yet. I have been told that pods of whales swim by from time to time. I believe there are foxes and coyotes here as well, as I have seen their droppings.

In addition to going on forest walks, I also love to walk on trails by the shore. On one of our recent walks, Rob and I were able to walk out to an island that is only accessible at low tide. It was exciting to explore a new place, although we didn't stay long as the tide was coming in and we did not want to be trapped there.


If you look closely at the photo labelled "Low Tide," you can see that the beach was covered with clam shells.

Our geriatric dog, Kate, is always thrilled to join us on our walks. When she was younger, she ran circles around us. Now we have to stop and wait for her.

In the photo above, Kate and I are standing at the edge of a small cliff. The trees are hanging out over the edge.

The photo above shows a stand of gnarled Garry oaks. They are growing in an exposed location, where the ocean winds blow.


The forests here are filled with big trees. They are not ancient forests, however, but second or third growth trees. Everywhere there are huge stumps and other signs of past logging activity. Trees have been logged on Vancouver Island for about a century and a half.

The final photo that I will leave you with is one of the pond. This is the same pond that was covered with ice in recent photos that I posted. The other day when I took this picture, there were some very noisy ducks having arguments over at the far end of the pond.