We are living in the land of dust. Dust in the air, dust settled on every flat surface -- kitchen counters, appliances, window sills. Dust in the nose; dust in the mouth. We try to wipe it up, and there it is again the next day.

We are having the main bathroom in our house renovated. We have hired a contractor who did some work for the neighbour next door. It turns out that he is also the brother of the neighbour across the street. We are surrounded by neighbours in our own age demographic who grew up on this street, and now have moved back into their childhood homes, either with their aged parents, or after their parents have passed away.

The previous owners of our house had done some significant renovations before we bought the place: in particular, the kitchen and the ensuite bathroom, and repainting throughout. The house has a huge  contemporary kitchen with stainless steel appliances, island, and breakfast bar. It is a joy to work in, and certainly caught our eye when we were house hunting. The four-piece ensuite also is very attractive, with a huge shower, and also a soaker tub (great for après ski).

But the main bathroom was very dated and rather grotty. The shower tile was chipped and cracked, and looked like it was from the 1970's. The bathtub and faucets might have been an original installation from when the house was built in 1959. 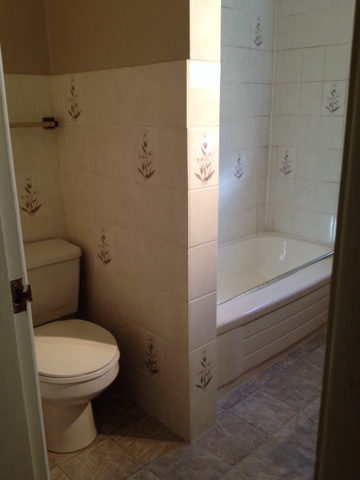 A Very Dated Bathroom
So we took the plunge a couple of weeks ago. Our timing was perfect, as this is a slow time for trades in our area. We have had a steady parade of tradesmen traipsing through the house, knocking out the walls and removing the fixtures from the old bathroom, and doing electrical work and plumbing.

Whenever you do reno's on an older house, you can expect some surprises. It turned out that the walls in our bathroom were lath and plaster -- much harder to remove than the gyp-rock of today's houses. The plumber replaced a sink drain pipe of galvanized steel that was 80% plugged (which involved some reconstruction in the basement). And the bathtub faucet had been leaking into a pony wall, which required replacement of a two-by-four. We decided to put in a second light above the tub. Today the drywallers are here, putting in the walls. 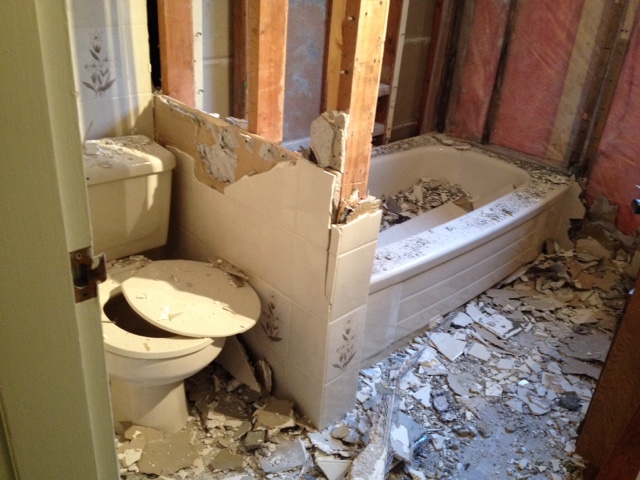 Demolition Underway
Everything has gone along very well. While we are having this work done, we decided to have top end dual flush toilets installed in all the bathrooms. As well, we asked the painter to do some repainting of some of the other rooms. So we now have a freshly painted master bedroom, my son's bedroom, and kitchen. I have never hired a painter before, but rather have always taken the do it yourself route. He is so fast and proficient! He completes in two or three hours what would have taken me two or three days. And it's all done with far less angst and no splatters. 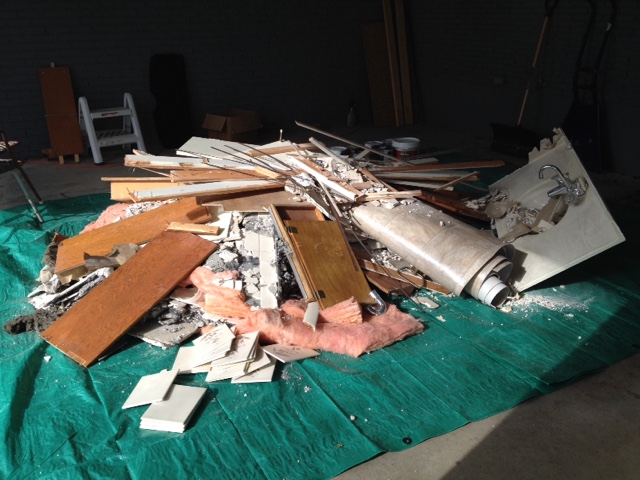 A Pile of Construction Garbage in the Carport
Yesterday, we went and chose the tile for the new bathroom. That was a fun part. So far, I am very happy with this renovation experience. Although I had forgotten about renovation dust, at least it is going to be for just a short period. I think sometimes it is worth spending the money to get skilled tradespeople to do the work.
Posted by Dr Sock at 8:44 AM