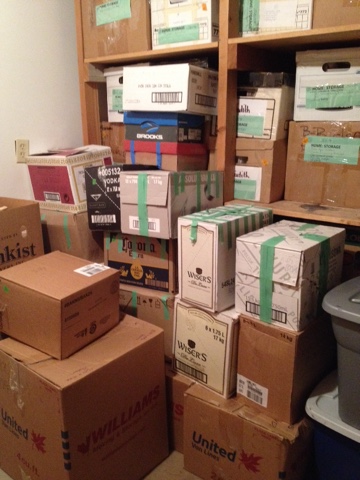 As we prepare to put our house on the market and get ready for an eventual move, I have begun a serious effort to de-clutter. I have read that getting rid of one's materialistic mountain of stuff and living a more minimalist life is a freeing experience.

And perhaps it is... for other people. But I am finding it very difficult.

I am not by nature a big consumer. I don't finding shopping to be an enjoyable pastime. I keep things and use them until they don't work anymore, and when possible, repair them. I have a 5-year-old cell phone, a 35-year-old blender, and a 50-year-old camp stove.

When we went on our 8-week camper trip last summer, I didn't miss any of the stuff left behind in our house. We have a storeroom full of boxes that haven't been opened since we moved here five years ago, and some of those boxes are from the move before that, 13 years ago.

Someone said to me, "If you haven't felt a need for anything in those boxes for years and can't even remember what is in them, why don't you just throw them out?" Why can't I do that, and why am I finding it so hard to throw things away?

Well, the answer is simple and complicated at the same time. Opening up those boxes and finding the items inside takes me on a sentimental journey. As I pick up and hold each item, I am immediately transported back to an earlier time in my life. The item, whatever it is, stimulates memories of people and experiences that, without the artifact, I would be unlikely to retrieve. And then I relive that memory.

In one box, I found a painting of the Battle of Salamis that I did when I was in Grade 4. Looking at that painting, I remembered my Grade 4 teacher, a wonderful woman who wanted to ensure that her students had their eyes opened to the wider world through music and art. Her art class was not an afterthought. Each student in the class was required to bring to school a two-foot by two-foot piece of plywood. To one side of it, we stapled a piece of vinyl cloth, with the fabric side out. Propped up on the chalk ledge of the blackboard, that board served as a painting easel as we stood to paint. Fifty-one years later, I still love to paint, and I still stand at an easel when I paint.

The teacher often tuned into CBC for a weekly radio program on art for children. The program began with a story of a historical event, such as Xerxes and the Battle of Salamis. At the end of the story, the narrator would instruct the students to paint a picture stimulated by the events in the story, and provide some tips. We would sit in our desks and listen to the program, and then stand at our easels and paint. For the Battle of Salamis, which was a naval battle between the Persians and Greek city-states, the narrator suggested creating the illusion of froth on the ocean waves by colouring on our papers with a white wax crayon before painting over it with our water colours. Looking at my childhood painting brought these memories flooding back.

In another box, I came across the language diary that I kept for my middle daughter. I wrote down her first words by date, both phonetically and in standard orthography, and made note of the context in which they occurred. She began talking very early, and her first two words were "Mom" and "num-num" (she liked to eat). Her first two-word utterance, just as she turned one, was "Kate bye-bye." And I laughed to remember that one of her first fifty words was "beer." If we drank beer, we had to be careful to not to leave the bottles within reach or my baby would help herself to the dregs.

I also discovered some of the handmade literacy books that I made for my children. I used to staple blank pages together to make a book, then write simple stories for them, and illustrate each page. When they were just learning to read, they could read aloud from their own personalized books that were about themselves, their pets, and their adventures. My children loved the books, and as they became older, they also made and illustrated their own books.

One of the photos below is of a book that my middle daughter made and illustrated for her little brother. It is "The Adventures of Super Sumo!" The other is of a book my son made when he was just learning to write. The word says "Chaucer," which was the name of one of our cats. 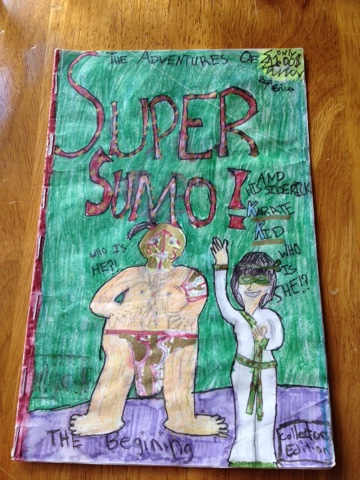 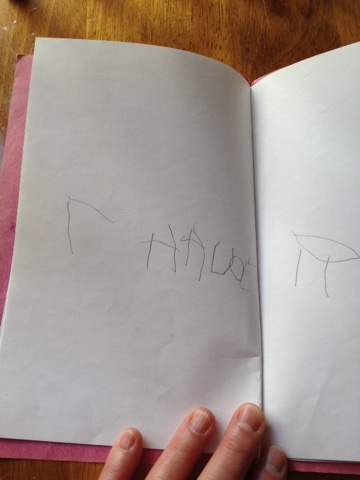 My children also had several experiences of making or decorating pottery when they were growing up. Our city had a community arts day each spring when the public was welcomed for free into various art studios and could participate in art activities. One activity that we all loved was that of the Pottery Club. They would set up their raku pottery kiln outside on the lawn, and sell pieces of pottery that had been fired but not yet glazed. My kids and I would paint the pieces with glazes and then stand and watch as the potters fired the pieces for us. Once they cooled, we would proudly bring them home and display them in our house.

Both my daughters participated in various art camps and courses. The photo below shows some details of a beautiful planter that my older daughter made for me. 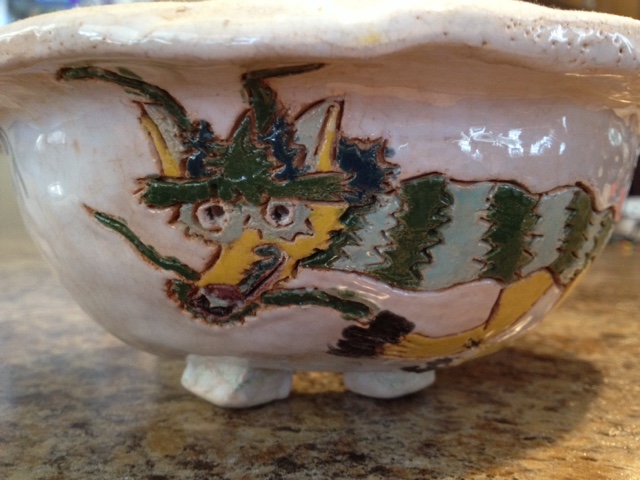 Although going through the boxes and trying to decide what to throw away has been emotionally exhausting, it also has been a wonderful, joyful experience. If I hadn't opened up those boxes to attempt to de-clutter, I would not have had the chance to take this sentimental journey. It is true that the things in the boxes are just objects, and to many people some of the items look like junk, but to me, they are saturated with meaning. My past life now has become memories, and those memories are springing back to life as I look at artifacts from my past.