A blogger that I follow, Karen Hume, recently wrote an interesting post on the behaviours of people who are lost. She explains that Lost Person Behaviour is the science of predicting how different kinds of people behave within the context of the activity they are engaged in, in order to develop effective strategies to find them when they are lost. This post and many other interesting topics can be found on her blog, Profound Journey.

The topic got me thinking about times in my life when I have been lost, as well as times that I have lost others.

Kids Lost on a Mountain

I had a somewhat unusual childhood. I grew up in a village in a remote northern area of Canada, and my parents gave us a great deal of freedom to roam. When we were very young, we had specific boundaries within the neighbourhood. For example, when I was five, I was allowed to go as far up the street as Billy's house, and as far down the street as Dorothy's house, and into the bush behind our house as far as the first field. I could cross the street in front of our house only if I came and asked first and had a suitable destination.

But by the time we were in our middle childhood, we ranged far and wide, and often did long excursions on our bicycles. It is hard to believe now, given the way children's movements today are restricted and always supervised, that my two younger brothers were allowed to go down to the river together to fish, without adult supervision, when they were nine and six respectively, and that they often brought fish home for supper.

The summer just before I turned fourteen, my parents bought a small, primitive ski cabin at a ski hill on a mountain. We spent many happy weekends that summer working together as a family fixing up the cabin. We insulated it and put in walls and flooring. I remember going up a ladder propped against the A-Frame to nail shingles on the roof. Our cabin was located on the farthest edge of the ski hill development, beside a steep gully. We had great fun climbing down into the gully to explore it. Usually each weekend, we four kids also would go for a hike. 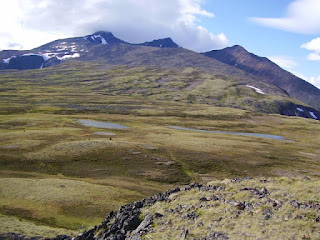 On one such occasion, we took a picnic lunch and did a more lengthy hike than usual. (The four of us included myself as the oldest at thirteen, and my three younger siblings, the youngest of whom was eight.) We decided to hike up to Crater Lake, which was probably six or seven kilometers round trip. It was not tricky to find the way there. We walked over to the ski runs, hiked up them to the top into alpine meadows, and then set off across the so-called "Prairie." Although there was no clear trail, we just hiked toward a peak where the lake was clearly visible at its base.

Once at the lake, we ate our picnic, played at the edge of the water, and hiked around on the huge boulders. On the way back, instead of staying high in the alpine until we reached the top of the ski hill, we dropped too low and found ourselves in scrubby growth at the edge of a gully. One of my brothers said that it was the gully that went beside our cabin, and that we could take a shortcut by going down into the gully and up the other side. He said that he had explored this very section of the gully previously and he recognized where we were. 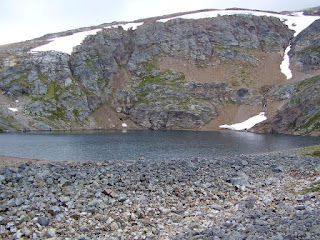 It seemed like a good idea. It would be a long way to go all the way over to the ski hill, hike down the runs, then double back to our cabin. It was late in the afternoon and we all were getting tired. So I agreed, and we went down into the gully and began to follow it down, looking for a way up the other side.

The walls of the gully were becoming steep cliffs. We did not recognize any of the landmarks of "our" gully, and moreover it seemed to be twisting away in the wrong direction, away from the ski hill area. I realized that we must be in a different gully.

After an argument, my younger siblings agreed to turn around with me. We all doubled back, followed the creek back uphill, and climbed back out of the gully where we had first entered it. We climbed back up into the alpine meadows and went the long way, via the ski hill runs. When we finally returned to the cabin, it was twilight, and my parents were very anxious and also relieved that their lost children had found their way back!

Lost on Another Mountain

Many years later, when I was in my forties, I was visiting friends who lived in a northern town. Their house was on the side of a mountain, which is not really a mountain at all, but more of a large, rocky, forested hill. This mountain is criss-crossed with trails, and it is a popular hiking and mountain-biking area for the locals. I had hiked there from time to time when I had visited my friends in the past.

My friends were busy with prior obligations one afternoon, so I took their dog and headed up the mountain trail beside their house. The dog and I had a lovely ramble along the trails, but eventually I decided that it was time to turn around and head back. About halfway back, beside a road, there was a place where multiple trails crossed, and went off in different directions. None of them were signposted. Somehow, I made the wrong choice and went quite a long way down a trail before I realized that it definitely was not the one that would take me back to my friends' house. At about this time, the dog took off, and would not come back, though I called and called.

So, I turned around and doubled back to the place where the road was visible. I still could not recognize which of the many trails was the correct one. So I went out to the road and started walking along it. I had a rough mental map of the area and I believed that the road would take me down the mountain to the base of it, and from there I could eventually pick my way back on connecting roads. However, it would be a walk of many kilometers, halfway around the mountain. A further problem was that I was recovering from a knee injury, and my knee was telling me that I had already walked far enough that day.

So, in the end, I went to a house along the road and used their phone to call my friends. (I had no cell phone then.) One of them came in his truck and picked me up. He said he had been worried when the dog had arrived home without me. I was thoroughly embarrassed that I got lost. I should have just followed the dog!

Even more scary than getting lost myself was losing a child. I lost my daughter “K” many years ago when she was a toddler, TWICE! The first time, we were in the women’s clothing section of a department store, and she was about two. She was right beside me, holding the handle of the stroller while I looked at clothes on a big circular rack. One second she was there, and then she wasn’t. Without stepping away from the stroller, I called her name and looked frantically in every direction. The many clothing racks were big and close together, blocking my lines of sight. Then I heard a little giggle. K had crawled inside the circular rack in front of me. She had gone along the floor below the clothes into the middle of the rack and was hiding on me. Even though the whole episode probably lasted less than a minute, the sense of panic just about stopped my heart.

The second time I lost her was about a year later, and it was even scarier. K and I, and her newborn baby sister were at a food court in a mall. We had finished our snack and I was putting the baby back into the stroller and loading the diaper bag. I was distracted for about a minute. Then I looked up and K was nowhere in sight. I called her name. There were not many people around and no-one had seen her leave. After concluding that she was not in the food court, I began running down the hallway of the mall pushing the baby in the stroller and shouting name. I was running in the direction of the mall administration office so that I could report her as missing. Around a corner and way down the hallway, I found her. K was grinning and hugging the giant furry mascot of the mall (which was really a human in a costume). It turned out that K had noticed big green footprints in the mall hallway and had followed them to the mascot; she loved big fuzzy creatures. It was one of the most terrifying experiences of my life, but K was not frightened at all. Quite the opposite -- she was delighted to have tracked down the mall mascot.

Some years, I am actually organized enough to send out Christmas cards. (I'm kind of old fashioned about Christmas cards.) Many years, I am so busy that I never quite finish sending out all the cards, even though I have managed to make a start on it. So I alternate, starting with the beginning of the alphabet one year and the end of it the next, just in case I don't get finished. The addresses are written into a little black address book that I have had for more than thirty years, although these days I also keep electronic contact lists.

Every year, addressing the Christmas cards makes me sad. It's because I look at all the names in my address book of friends that I have lost touch with, and former neighbours and colleagues in towns where I used to live. Who knows where they are now? Why did I do such a bad job of keeping in touch? It is the one thing that I really love about social media: through Facebook I have managed to find or have been found by people who had previously been lost to me.