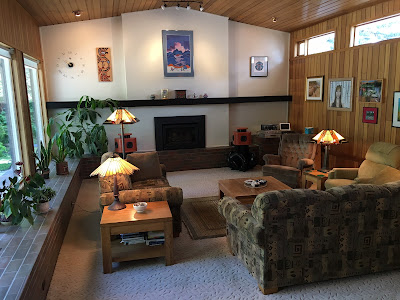 The living room, ready to show.

I have never been known as a crackerjack housekeeper. I mean, I keep all the fundamentals clean, but our place generally is a little untidy, in a cozy sort of way. And anything above my eye level doesn't get dusted very often. Seeing as I am short, quite a lot of dust escapes my notice.

Anyways, that was the old me. The new me, required to keep the house sparkling because it is on the market, has become rather obsessively perfectionistic about cleaning. Actually, both Rob and I have become cleaning demons, racing around before every showing or open house, scrubbing, polishing, mowing, and weeding until the house is gleaming like a Mr Clean ad, and the yard looks like Better Home and Gardens. (Full disclosure: Rob actually has become the primary housekeeper the last few years, wonderful person that he is.)

So one thing that I have discovered with all this cleaning is that vigorous housecleaning takes a fair bit of physical effort. Not that I am going to drop my regular exercise, consisting of walks, hikes, cycling, and yoga, but on days when we have put in a few hours of housecleaning, I don't feel especially interested in going for a walk afterwards.

So I was complaining on the phone to my Mom about how tiring housework is. She just laughed. My Mom always has kept a lovely house. I remember as children, we used to ask my Mom to show us her muscles. She would flex her biceps, and even though she weighed only 98 pounds, a tiny little woman, her biceps were as big as grapefruits. Or so it seemed to my child's eyes. We all wanted to grow up to be as strong as Mom. Maybe if I had realized that those muscles came from housework, I would not have grown up to be such a lackadaisical housekeeper.

But, I came of age in the seventies. I read Betty Friedan, Nancy Friday, Kate Millett, Marilyn French, Alice Walker, Ms. Magazine, and Virginia Woolf, and joined the women's centre at my university. I was proud to describe myself as a feminist (and I am disappointed but not surprised that forty years later, feminism is still considered an f-word by some people). To my twenty year-old self, housework was a trap for women, a pointless endeavour that distracted us from more important and useful occupations. Housework, throughout my adult life, was an unpleasant necessity relegated to the corners of life: after the kids were in bed, or Saturday mornings, when the whole family would do chores and then forget about it for another week.

So lately, as well as discovering that it can be a bit of a workout, I also have discovered the meditative aspects of housework. It is a relaxation for the mind to just focus on the mopping or window washing. It pushes all the other frantic squirrel-mind thoughts away for a little while. It is satisfying to make things nice and clean. 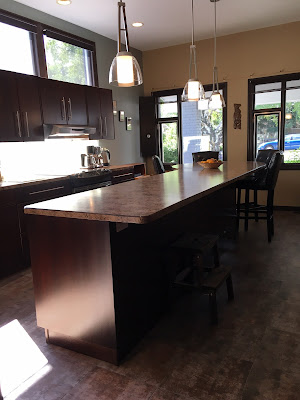 The kitchen, all shined up.

I guess I have to rethink my previous negative attitude toward housecleaning. It does have its worth. It turns out that Mom knew best.

Although, I need to note that Mom was more than a housekeeper; she was a trailblazer in her own time, the repressive 50's. She was the first person in her family to pursue post-secondary education, and when she was in her early twenties, she moved with a girlfriend to take a teaching position in the Canadian north. The highways were unpaved. The teacherage was a tar-paper shack. And during my childhood, when all the women in the neighbourhood wore house-dresses, my Mom wore jeans. She was adamant that I would have the opportunity to attend university. So, my Mom has been a great role model all round.

Now, if the house would only sell so we can get back to our more relaxed approach to housekeeping!